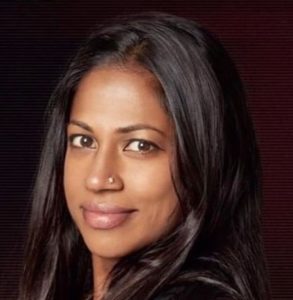 Natalie Anderson got worldwide fame after she won a massive $1 million prize on Survivor: San Juan del Sur–Blood vs. Water in 2014. However, she began her reality TV career long before 2014.

She was a cast member on CBS‘s The Amazing Race 21 along with her twin-sister Nadiya in 2012. The twin girls ended up in 4th place.

Natalie again became a subject of online discussion since she starred in MTV‘s The Challenge: Double Agents, which premiered on the network on December 9, 2020.

This article will explore the biography of Natalie. Also, get insights into her job information, medical issues, and husband reading this wiki until the very end.

Natalie Anderson was born in New York City to her proud parents. Her dad, Andy Bernie Anderson, is Tamil whereas her mom is Sinhalese. As most people already know, Natalie has a twin sister named Nadiya.

Natalie’s ethnicity is Srilankan-American. She moved to Srilanka with her family when she was three and stayed there during the Srilankan Civil War.

Her family only moved to West Hartford, Connecticut when Natalie was thirteen. Immediately after arriving in the US, Natalie joined Hall High School and ran track for the school.

Natalie Anderson stands at an average height of 5 feet 5 inches. Currently, she weighs 67 kilograms on the weighing scale, which is 15 kilograms lesser than the time when she was not a part of Survivor.

Survivor: San Juan del Sur winner has serious medical issues related to concussion. Natalie first suffered from a concussion when she was playing rugby for Fordham University in 2007. The concussion returned in 2013 after she banged against the car.

Furthermore, her third concussion stopped her from being a part of Survivor: Game Changers. For a person with such a concussion history, she has to play it safe in The Challenge.

Natalie began her reality TV career along with her twin sister, Nadiya, in the 21st season of The Amazing Race. The Andersons won two legs in the show but were eliminated in 4th place.

Although the twinnies returned for the All-Stars edition of The Amazing Race to compete for a massive $1 million, they got eliminated in the first leg.

The power twin-girls then participated in Survivor: San Juan del Sur. While Natalie went on to win the coveted prize of $1 million, her twin sister Nadiya became the first contestant to be voted out.

Natalie then returned to compete on the All-Winners season of Survivor in early 2020. Despite being voted out first, she fought her way into the game from the Edge of Extinction only to end the show as a runner-up.

In 2020, Natalie was announced to be part of MTV’s The Challenge: Double Agents. Though most of the contestants in the show view her as a “rookie”, everyone acknowledged she had athletic prowess. On the 13 January 2021 episode of the season, host TJ Lavin revealed Natalie was sent home because she couldn’t compete. Natalie later shared she let because she was pregnant but later suffered a miscarriage.

Aside from appearing in reality TV shows, Natalie is a Crossfit coach. Also, the 34-year old wishes to own a Crossfit gym one day.

Natalie Anderson’s reported net worth, as of this writing, is around $750 thousand.

By Jan 2021, the CrossFit coach Natalie Anderson had been dating a guy named Devin Perez for some time now. David is a real estate broker by profession and currently works as a Broker Associate at Luxury Living by Michael Hern.

Though Natalie had posted a picture with her boyfriend and dad on May 3, 2019, they became Instagram official after Natalie wished her long-time boyfriend a happy birthday.

Uploading a picture of Devin flexing his biceps, Natalie wrote,

“This Man Right Here 😍
Happy Birthday, Mi Amor. Thankful to have you by my side.”

Since both Natalie and Devin were inclined towards heavy physical exercises, they often shared videos of their workout sessions on their socials.

The adorable pair also took a trip to Tulum, Mexico, and shared several pictures from the trip on November 23, 2020. In most of the pictures, the pair could be seen trying different cuisines. 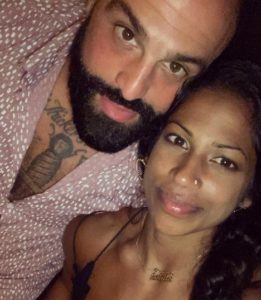 Natalie and her long-time boyfriend, Devin enjoy their trip to Tulum

Although there was no information available about Natalie’s previous relationships, her potential future husband Devin did have one beautiful baby daughter. Some photos of his cute daughter can be seen on his Instagram handle.

Natalie and Devin suffered a tragedy that no parents should experience. Fresh off her Survivor exit, Natalie learned she was 8 weeks pregnant. Her world then came crashing after going through a miscarriage. Not long ago, she had begun experiencing intense cramps.

As of this writing, the pair had not announced any wedding plans.