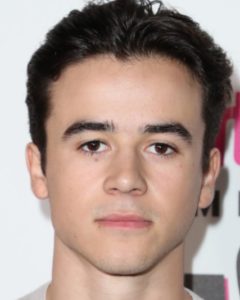 American actor Keean Johnson first shot into popularity after his role as Adam Freeman on the TV show Spooksville began to catch the attention of many movie lovers.

The Nashville actor played the role of Marcus in the movie called The Ultimate Playlist of Noise, which dropped on Hulu on January 16, 2021. The on-screen chemistry between Keean and Madeline Brewer, who plays Wendy in the movie, left many people to think if the pair are a couple in real life. However, it looked like the actor is only a friend of Madeline, nothing more, nothing less.

With that being said, Alita: Battle Angel actor does have a girlfriend in real life. Read the article until the very end to find out who that special girl is. Also, get insights into Keean’s family, career, and net worth.

Keean Johnson was born and raised in Denver, Colorado. His ethnicity is mixed since his father, Mark Johnson, is British, while his mother, Brenna Johnson, is American. As a kid, Keean was homeschooled like his younger sibling, Cade.

At 5, Keean joined the dancing class on his mom’s whim. However, the Spooksville actor later dropped from his dancing class to take acting lessons.

How Tall Is Keean Johnson?

As of January 2021, Keean Johnson stood tall at a height of 5 feet 7 inches. The emerging actor also weighed around 71 kilograms.

Keean boasts massive social media reach since he is very active on his Instagram handle. His Instagram account @keeanjohnson had a following of more than 60 thousand followers as of this writing.

The Colorado native Keean Johnson is reported to have garnered a massive net worth of $3 million throughout his acting career.

Keean started his career through a short film called Sam Presents (2002). The actor guy then was on a hiatus for almost 10 years. But when he returned to the entertainment industry through Nashville (2012), he gave one spectacular performance plating Colt Wheeler.

Keean then went on to grab major roles in movies and TV shows like Spooksville, The Fosters, Alita: Battle Angel, among others.

Keenan’s movie, The Ultimate Playlist of Noise, went live on Hulu. More about his role in the next sub-heading.

His Role On The Ultimate Playlist of Noise

Keean plays Marcus Lund, a music-obsessed high school senior, who passes out one day and later finds out that he has a tumor in his body through a doctor. Marcus has no choice but to undergo brain surgery, but there’s one catch. The catch is that brain surgery will leave him deaf.

Choiceless, Marcus, decides to seize control of his fate by going on a road trip and making The Ultimate Playlist of Noise.

Though a Twitter account by the name of Do This, through a series of posts, claimed that Keean Johnson is a proud gay man and has no relation, whatsoever, to his girlfriend Sofia Boutella, it seems like all those claims were false.

The same account, which tried to oust the American actor as a gay man, has been active on Twitter since May 3, 2020. This inactivity of the Twitter page has further made people not believe in the Twitter account’s claims. Besides, now Keean and his girlfriend have also been featured on each other’s Instagram.

Keean Johnson and his girlfriend, Sofia Boutella began dating sometime in 2018. The news became public after they made their public appearance at the Alita: Battle Angel premiere at Regency Village Theatre in Los Angeles in February 2019. 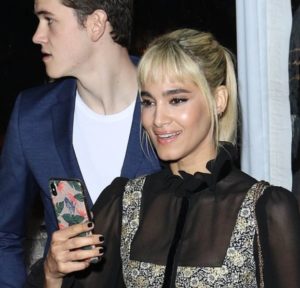 Keean and Sofia together at Alita: Battle Angel premiere.

According to the sources, Keean began dating a year ago before their public appearance at Alita: Battle Angel premiere and had also separated for a brief time in between. The source further claimed that the pair are “super happy and getting serious.”

Like Keean, his girlfriend is an actor and a dancer. The actress of movies like Kingsman: The Secret Service and StreetDance 2 also starred as Princess Ahmanet in the popular 2017 movie called The Mummy. As a dancer, Sofia worked with Madonna for six years until 2010.

The pair’s recent picture can be seen on Sophia’s Instagram. Alongside a picture of them, Sophia simply wrote “2020” in the caption.