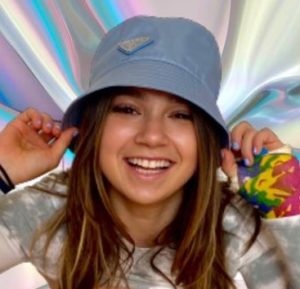 The new Netflix show, My Unorthodox Life, is now finally here to get you through these boring COVID weekends. The reality series, which premiered on July 14, 2021, follows Julia Haart‘s life. Julia, a former member of an ultra-orthodox Jewish community, is the CEO of the modeling agency named Elite World Group.

The show also features her family, which includes her husband, ex-husband, and her four kids. A standout of this show, Miriam Haart, is one of Julia’s four kids.

Here, Miriam is the only thing our focus is going to be on. This Miriam Haart wiki article covers her age, education, net worth, partner information, and much more.

Miriam Haart was born in the year 2000 and thus turned 21 years of age in 2021. What’s more, she celebrates her birthday on the 25th of January every year. Her zodiac sign is Aquarius.

Miriam Haart was born as a third child to her parents, Yosef Hendler (dad) and Julia Haart (mom). Miriam’s mom was only 19 when she married her love Yosef Heldner. The duo remained as a couple for 23 years.

Miriam’s mom Julia again saw love in the eyes of her now-husband Silvio Scaglia. She introduced Silvio to the people in June 2019. The pair had an extravaganza wedding on June 22, 2019.

Miriam has three siblings in her family. All of them have a common biological father i.e. Julia’s ex-husband Yosef. Miriam was born after the birth of her sister Batsheva and brother Shlomo.

Batsheva is a lifestyle blogger, a TikTok celebrity, and the owner of Sunnies and Sangria. She got married to her husband Ben Weinstein on October 17, 2012. Miriam’s elder brother Shlomo is a Columbia graduate and recently he completed an international summer program on Sociology and Genetics from the University of Cambridge.

The youngest of the Haarts, Aron, is a high school student and has the strongest ties to the orthodox Jewish community.

Miriam Haart stands at a short height of 5 feet 5 inches and weighs no more than 55 kilograms. She has brown colored hair and eyes.

As of 2021, Miriam Haart was pursuing her computer science degree at Stanford University. She joined Stanford in 2018 and will be graduating in 2022 if all goes well.

Computer science has not just relied on her formal studies to forge a path on app development. She attended Programming Blockchain Intensive Seminar in 2018 and acquired a certificate for that.

Furthermore, her LinkedIn profile shows that Miriam studied Computer Science at Make School from 2016 to 2018. She learned about Advanced IOS Applications at Make School Summer Academy.

At one point, in the show My Unorthodox Life, Miriam said that she is passionate about building apps that empower women. Miriam created her first mobile app at the very young age of 13.

As her personal website enlists, Miriam has created various iOS apps over the years; she has even won some awards for her apps.

As of 2021, Miriam works as a co-founder and CPO at Eazitt. Per her LinkedIn Profile, Eazitt “is a decentralized consumer good delivery network and digital shopping platform that offers African consumers the fastest and cheapest store-to-door delivery on the continent.”

Miriam also works at IDEO as a CoLab Fellow. Since January 2019, Miriam has been teaching CS11: How to Make Virtual Reality to the students of Stanford University School of Engineering.

Additionally, Miriam also served as a project manager at Yewno. As a product engineering, she created a platform that allows students to collaborate, research, and publish articles in peer-reviewed journals.

Is Miriam Haart Gay Or Bisexual?

Miriam Haart is openly bisexual and not gay. For the entirety of Season 1 of My Unorthodox Life, Miriam spends her time exploring her sexuality and dating several men and women.

Miriam Haart usually keeps her dating life away from the public radar. However, in the photo uploaded by her sister Batsheva on May 26 on her Instagram handle, Miriam appeared to be dating a woman named Nathalie Ulander.

The picture that Batsheva posted featured herself, her partner Ben, Miriam, and Miriam’s date. Batsheva had captioned the picture as “our first double date.” 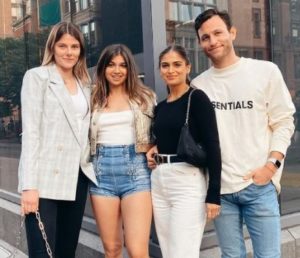 A search on the Internet reveals that Miriam’s rumored girlfriend at the time is a student at Queens College. Nathalie studies International Business and Economics, Finance & Business. She works as a Trade Finance Specialist at Handelsbanken.

However, as of July 2021, we did not know if Miriam and Nathalie were still together or that they ever dated.