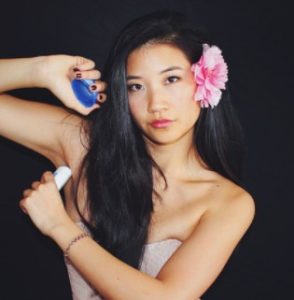 English-born Keir Gilchrist is one hell of a multitalented personality. Popular for his roles as Sam Gardener in the Netflix show Atypical and as Marshall Gregson on Showtime’s series United States of Tara, Keir is also a musician as he provided vocals to bands like Whelm and Phalanx.

Despite having played a gay character in the United States of Tara, Keir is not a gay himself in real life. In fact, the talented artist has a girlfriend named Michelle Farrah Huang, who also happens to be an actress.

Let’s learn about their dating life in this Michelle Farrah Huang wiki article below. Also, get insights into Michelle’s age, net worth, and family information.

Reportedly, Michelle Farrah Huang and Keir Gilchrist first met in the sets of Atypical in 2016. It was there when the duo got to know each other deeply. Circa late 2016, the two began dating.

The whole world knew about their relationship only in May 2017 when Keir shared a picture of him with Michelle on Instagram. United States of Tara had captioned the picture as “Hit up NYC with my girl.”

Michelle introduced her boyfriend Keir to her fans two months later in July. She also shared a picture with Keir to announce their relationship.

The couple has an excellent rapport. In September 2017, Keir called Michelle as his “partner in crime” in an Instagram post. 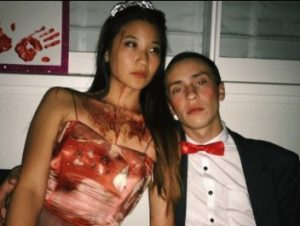 At the 2017 Halloween party, the two literally rocked their looks. Michelle donned a blood-stained dress whereas her beau rocked a black suit with a white dress and red bow-tie.

Despite living very busy professional lives, the two occasionally go on vacation together. In August 2018, Keir wrote, “Enjoying summer with my ride or dies. Hope you’re all getting plenty of fresh air, ” alongside a picture of his girlfriend.

As of 2021, the couple is currently in the fifth year of their relationship. However, they are not married just yet.

The popular Netflix show Atypical returned for the fourth and final season on July 9, 2021. As viewers of Atypical know, the Netflix coming-of-age comedy-drama is based on the life of an 18-year-old autistic high schooler Sam Gardner, played by Michelle’s boyfriend Keir Gilchrist.

If you watched Atypical clearly, chances are that you have already seen Michelle. Michelle Farrah Huang first appeared in the second episode of season one of Atypical. She played a guest character named Tanya. In total, Michelle has appeared in 6 episodes of Atypical.

Born in 1989, Michelle Farrah Huang was 32 years of age in 2021. She celebrates her birthday on the 3rd of June. Her zodiac sign is Gemini.

As of July 2021, Michelle kept information about her family under wraps. However, we do know that her parents did not approve of Michelle taking acting as a profession.

That being said, we know a thing or two about her boyfriend’s family. Keir hails from a reputed and famous family in Canada. Born to Catherine Peters (mom) and Ian Gilchrist (dad), Keir’s grandfather Douglas Peters served as the Liberal Member of Parliament for Scarborough East and as Secretary of State for International Financial Institutions.

Additionally, Keir’s brother, Evan Brother, is a popular actor. Some of his works are Jack Brooks: Monster Slayer, Webdultery, Carrie, and The Cabin House.

Michelle Farrah Huang stands at an average height of 5 feet 7 inches (1.7 meters) and weighs no more than 55 kilograms. Her distinctive physical characteristics include black hair, brown hair, and an athletic body.

Like every small screen or big screen actor, Michelle Farrah Huang did theatres when she started acting professionally. Her theatre credits include The Waiting Room and South Bay Ballet Company.

Represented by Stark Talent, Michelle got herself a lot of training and education on acting. She has a Bachelor of Arts degree from the University of California, Los Angeles. She learned about Improv at UCLA and UCB. Michelle studied Advanced Scene Study in Ivana Chubbuck Studio.

Her first TV role came in 2013 in a television movie called Promo Life. She played the role of Chai Entourage. In 2015, she played Milt’s Assistant in Battle Creek.

In the 2016 TV show Notorious, Michelle appeared as Erin.

Apart from being an actress, Michelle is also a ballet dancer. However, we don’t know if she does ballet professionally. She learned ballet and pilates at Lauridsen Ballet Centre.

Michelle Farrah Huang’s net worth was measured to be around $150 thousand in 2021. Whereas, her boyfriend’s fortune is no more than $400 thousand.