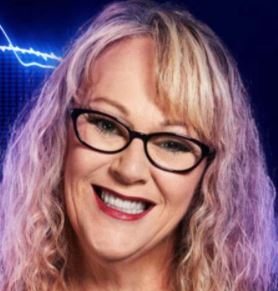 Comedian Michelle Rider was announced as one of the participants of the upcoming 3rd season of The Circle US. If you do not know The Circle franchise, trust us when we say that it is one of the most original reality shows out there.

You will have to keep reading if you want to find out more about The Circle and Michelle Rider. You will find a tiny bit of info about the comedian below like her age, hometown, husband, etc over this Michelle Rider Bio!

Michelle Rider On The Circle

The Circle is a reality show that began in the UK in 2018 and then found its way into the American reality scene in 2020. As of 2021, the British version has four seasons and the American one has three, with the third season set to be released on 8 September 2021.

The format of the show is like this: eight contestants move into the same apartment building and “flirt, befriend and catfish their way toward $100,000.” That is the prize money. The twist is that no one can meet each other face to face. Everything has to happen through a social media platform called The Circle. The participants rate each other throughout the show and the one with the highest rating by the finale wins.

Michelle herself announced her participation on 27 August 2021.

Michelle’s maiden name is Belk and born into Belk family of Pacolet, South Carolina. Her parents were Roger Eugene Belk and Anna Lou Jackson Belk. Roger and Anna had been married for over 49 years until the former’s death at the age of 67 in 2013.

Michelle’s grandparents were the late Javis Monroe Belk Jr. and Gaynelle Copper Belk. Apart from her parents and grandparents, Michelle has two siblings in the family, both of them brothers with the names Chris Belk and Randy Belk. We do not know much about Chris except that he still lived in his hometown Pacolet in 2021. Randy, meanwhile, lived in Roebuck and was married to Ruth Belk.

A tall woman, Michelle Rider reportedly measures at a height of about 5 ft 7 inches. And in 2021, she weighed about 63 kgs.

Michelle Rider was present on a lot of social media platforms as of 2021. Apart from Facebook and Instagram, she was also present on Tiktok, on Patreon, on Cameo, and Youtube.

Similarly, on Cameo, Michelle had 17 5-star reviews. On her Youtube channel, ShellyBellyComedy, she had 3.95k subscribers. However, she was the largest on Tiktok. On her Tiktok handle @shellybellycomedy, Michelle had 754.9k followers and 8M likes.

Michelle Rider has two Linkedin profiles. One had her job as a freelance comedian and the other has Michelle’s job as an Executive Administrative Assistant to the Sr. Director of Operations at Belk. We do not know much about her career as an executive administrative assistant. However, her comedy career was really taking off post-COVID. Her tagline, as a comedian, is “not your average southern belle”.

Michelle has really taken off in Tiktok and she has been booking comedy gigs all over the place. In fact, she was going to feature at WudTok in September 2021. She was also selling merchandise like T-shirts, sweaters, cups, leggings, hoodies, etc. And because of her increasing comedy fame, Michelle was selected to be a part of the reality show The Circle.

By August 2021, Michelle had amassed an alleged net worth of about $700 thousand.

Michelle Rider’s husband’s name is Jason Rider. She has been married to Jason since 2001. We do not know much about Michelle’s husband.

Michelle has fours kids, a son named Brandon Shuler and daughters Jennifer Nichole, Magen Rodrigues, and Ashton Elizabeth Rider. We are not sure if Michelle had either Brandon, Jennifer, or Magen with her husband, Jason. They might have been born from Michelle’s previous relationships. Most likely, Ashton was the only child that came from her marriage to Jason.

Brandon worked for the US Marine Corps and was engaged to Morgan Berry. They also already had had a kid together. Michelle announced the arrival of her grandson, Shuler, on her Facebook in September 2020.

We do not know where Jennifer but she is a married woman with four kids. Her husband’s name is Jason Petty. Magen is also married to a man called Dustin Rodrigues and had her own children. We do not know much about Ashton except that she lives in Charlotte, North Carolina.