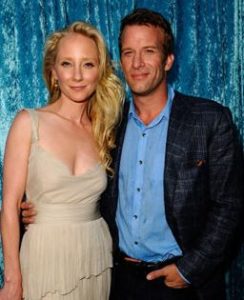 Anne Heche has a long list of lovers and has dated both high-profile men and women in between. And After 11 years long relationship plus a brief affair that lasted a year, Anne started dating Hung co-star Thomas Jane.

So before, delving into the relationship between the two, let’s take a trip down memory lane regarding her past relationships.

She was born on 25 May 1969 to her father Don who worked as a choir director and her deeply religious Christian mother Nancy. As described by Anne, her father was gay and lived a very promiscuous life. And in the end, he contracted AIDS from one of his gay relationships and died at the age of 45 in 1983.

After her father’s death, her mother stayed single until she remarried in 2008. However, Anne and her mother never saw eye to eye and got estranged from one another.

More on her family, Anne Heche had four elder siblings. One of her sisters Abigail Heche worked as a prostitute but stopped at all and started working as a jewelry designer in New York. And rest of her three siblings passed away including the writer of a book titled Anonymity: The Secret Life of an American Family, Susan Bergman.

As for her net worth, Anne Heche reportedly sits on a total fortune of $8 million.

Before Anne Heche met her husband Coleman ‘Coley’ Laffoon, she was in a relationship with at least five high-profile Hollywood personalities.

One of her earliest romances that the media took notice of was singer Lindsey Buckingham of the Fleetwood Mac. The relationship lasted for only a year. In 2006, Lindsey wrote a song titled Down on Rodeo which he claimed was about his relationship with Anne Heche.

After the end of that relationship, Anne started dating actor/comedian Steve Martin. The relationship continued for 2 years before the pair called it quit in 1997.

Speaking on the relationship with ABC News, she desired for love of an older man, comfort, and humor which Steve offered. And the reason behind the break-up, Steve wasn’t the problem. However, Anne felt what she had at the time, she couldn’t commit to.

On the other hand, Anne was also dating Neal H. Moritz. The relationship didn’t attract much attention and ended in the same year, she did with Steve Martin.

And finally, she met Ellen DeGeneres, but more on that later.

Following her relationship with Ellen DeGeneres, she had a brief affair with actor Vince Vaughn. But the relationship never got confirmed and when the interviewer asked about the affair in Entertainment Tonight, she cut off the interview in the middle of it and left with the tape as a result of the disrespect which she felt.

After exhausting a long list of romance to find the love she always wanted to fill the void created by childhood sexual abuse and trauma, she met her future husband, Coleman ‘Coley’ Laffoon. The pair got acquainted while working in Ellen’s documentary, where Coleman worked as a cameraman.

Anne and Coley got engaged in May of 2001 and went on to tie knots on 1 September the same year. The married pair welcomed their son Homer Heche Laffoon on 2 March 2002. After staying married for 9 years, Anne and her husband got divorced in March of 2009.

Was Anne Heche Ever Married To Ellen DeGeneres?

For Anne Heche, Ellen DeGeneres felt like the end of the tunnel she traveled inside for 27 years. She met her on the night of the Oscar 1997.

As Anne described, when she saw her, Ellen saw a radiant and ravishing woman she had never seen in her life. And it was just one week before, Ellen’s sitcom character announced her homosexuality on national TV.

Moreover, Ellen embodied everything Anne’s father couldn’t. She openly embraced her sexuality and set on her way changing the world one day at a time. And a side of Ellen made Anne fall for her.

For the first time, Anne opened up about the demons she kept inside. The assaulted life she lived as a child, living two lives, as she had an alter ego named Celestia, and many more.

And now for the main question, did she ever get married to Ellen?

Sadly, No! The pair could never see it through to the end of the aisle. As their relationship ran into trouble on the backdrop, the couple ended their romance, breaking up in 2000.

However, Anne did mention her intention of marrying Ellen. But the only problem was that Vermont hadn’t legalized gay marriage at the time.

After her relationship with Ellen, she dated James Tupper starting in 2007 when her marriage with Coley was in a bad place. They went on to build a successful relationship for 11 years and had a son named Atlas Heche Tupper born in 2009.

As everyone thought this association must be the one for Anne Heche, but it ended in January of 2018 and they pair parted separate ways.

After James Tupper, Anne Heche moved on immediately and started dating TV writer-producer and co-creator of Nurse Jackie, Liz Brixius. They started their relationships as friends but took it to the next level.

The budding relationship gained traction in May of 2018, only 4 months after breaking up with James. Like her previous relationships, this one also ended within a short period ending in 2019.

Most importantly, Anne Heche began dating the Hung co-actor Thomas Jane. However, the relationship took a long time to establish as they never had feelings for each other at the time.

As Anne recalled, they certainly had chemistry but without feelings. Plus, she thought Thomas hated her as he, on Anne’s word, grumbled during the breaks. Furthermore, they never spoke outside of the set.

Why did it take too long for them to get together? Anne was dating James Tupper and Thomas was married to Patricia Arquette. Nevertheless, they got in touch with each other once again when Anne’s manager relayed the message that Jane wanted to do a new project with her.

The pair’s character discussed the nature of love and spent a few hours talking about it. And the feelings for each other grew inside the couple from that point on. And this time, Thomas didn’t hold back to share his feeling for her.

As of 2020, Anne was a mother of 18-year-old son Homer whereas Thomas had a 17-year-old daughter Harlow from his ex-wife, Patricia. They’ve been working together to blend in the two families while loving and caring for each other.

Anne and her boyfriend Thomas also hit the red carpet during the Hollywood China Night Oscar viewing party in Beverley Hills earlier in 2020.

In 2020, they made a cinema debut with their indie movie The Vanished which premiered on 21 August 2020. The couple played husband and wife in the movie and the low-budget film was appreciated by many.

By 2021, Anne and Thomas had parted ways. August that year, Page Six reported a rumor that the actress was dating skincare mogul Peter Thomas Roth. The romance speculations arrived after insiders spotted the couple several times. Reportedly, they appeared like more than pals.

However, a rep for Anne told Page Six that she was single and enjoying meeting new friends.

Previously married Thomas also dated Brooke Mueller in the past.

Who Is Riko Shibata? Wiki, Job, Age, Ethnicity, Net Worth

They say when you are truly in love with someone, all things like age, measurements, or ethnicity does not...