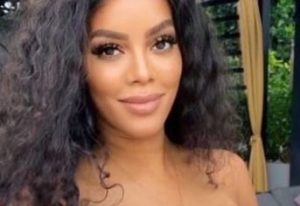 A new Second Stew aboard Lady Michelle, Lexi Wilson joined the Below Deck Mediterranean for its sixth installment that premiered in June 2021. But Unlike others who were passionate about the industry, Lexi got into yachting by sheer coincidence.

So, who is she? Delve into this Lexi Wilson Wiki to learn all about her.

Information about her birthday wasn’t available.

Lexi Wilson is open about her parents. No wonder, over the Below Deck trailer we could see her calling her mother about possibly leaving the vessel. Just in case you missed it, the teaser showed Lexi getting into a physical fight with deckhand Zee after which she rings her mom.

As for her dad, Edwin is alive no more. Lexi first shared the news about her father’s death on 30th May 2020 via IG. She wrote,

“I can’t believe I’m posting this but I love you so much Dad, the world will never know how much I loved you and you will be missed.”

Furthermore, it seems like Lexi was Daddy’s little girl. She often uploaded various images of her family over IG and especially highlighted a series of IG stories titled “Daddy”, dedicated to her late father.

Recalling her childhood, Lexi shared that they grew up poor. Their family trips often consisted of museums and historical monuments as her father wanted Lexi and her siblings to learn about the history of black Americans.

Also, Lexi confessed that her passion for traveling is a tribute to her father. Reportedly, he wanted his kids to travel the world ever since they stepped into this world.

An avid traveler, Lexi has been to places like Moscow, Russia; Maui, Hawaii Islands; Amsterdam; Abu Dhabi; Amalfi Coast, Italy, and many more

Her reported body measurements were 37-25-36 inches.

Lexi Wilson On Below Deck

As seen on the Below Deck trailer, Lexi Wilson was already involved in some onboard drama, where she gets into a fight with Mzi “Zee” Dempers, and threatens to become into a “b*tch” in front of Malia. Later, she then calls her mom about possibly quitting the show.

This season, Lexi was joined by co-stars — David Pascoe, Katie Flood, Malia White, Mathew Shea, Courtney Veale, Lloyd Spencer, and Mzi “Zee” Dempers. While the captain of the ship was no other than the returning cast Sandy Yawn.

Just in case you are curious, Lady Michelle is a 180ft long yacht and boasts six cabins, accommodating 12 guests and a crew of 14.

Her BravoTV profile depicted her persona as “glamorous”, a person wanting to “have a good time”, and “always one to prioritize service to the guests.”

Lexi Wilson garnered a net worth of under $300 thousand by 2021. Reportedly, her Below Deck salary was around $50 thousand per season then.

Originally, Lexi is from the Bahamas. She only moved to the states for college after receiving a scholarship for the Track and Field program. Alongside education, Lexi also went on to participate in pageants and later even represented the Bahamas in the Miss Universe pageant 2013. Unfortunately, she lost to Miss Venezuela Gabriela Isler, who took home the crown.

So, during her time as a pageant in Florida, she stumbled upon a yacht captain who invited her to come work as a stewardess on his boat. Since then, Lexi never looked back.

Stepping into the entertainment industry, Lexi already had 2 IMDB credits entitled to her name. One for Miss Universe (2013), and the other for Below Deck Mediterranean (2021).

Talking about her hobbies, Lexi loved traveling, playing tennis and golf, doing photoshoots, and “singing”. Yes, Lexi claimed that she was “the best shower singer in the world.”

Where Is Lexi Wilson Now?

By June 2021, Lexi Wilson was no longer in the yachting industry. She even kept the hashtag #NOLONGERINTHEYACHTINGINDUSTRY on her Instagram bio.

Perhaps, her Below Deck experienced made Lexi realize that a career in the sea isn’t for her.

As of late June 2021, Lexi Wilson entertained 3.3K followers on her Instagram @theonlylexiwilson. Most of her posts then included her raunchy pictures and flowers. From orchids to roses to lavenders, it was all there over Lexi’s IG.

Lexi Wilson is one of the new Below Deck stars who kept their dating life under wraps. But the absence of her boyfriend could plainly be noticed over her social media pictures. So, we guess that Lexi was single before she ventured on the show.

One Reply to “Lexi Wilson Wiki: Below Deck, Boyfriend, Net Worth, Age”