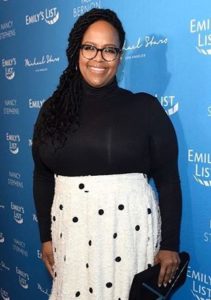 An American actress/screenwriter, Natasha Rothwell became famous for her role as Kelli in HBO’s TV show Insecure. Apart from that, she also made headlines on many entertainment news portal by losing her weight.

Of all the aspects of her life, Natasha’s dating life has been quite a riddle which her fans wanted to decipher. So delve in this wiki-style article which brings you bio, career and relationship status of Natasha as of April 2020.

Natasha Rothwell was born on 18 October 1980 to her parents in Wichita, Kansas, the United States. Her father was employed in Air Force whereas her mother work was related to the Comprehensive Cancer Center.

Owing to the nature of their job, she and her three siblings traveled places with the family. During that time they relocated to several places in the states including Alburquerque, New Jersey, Florida, and even outside the states in Turkey.

The extensive traveling the family did proved to be worthwhile for the career of Natasha Rothwell as a writer. Much of what she wrote was cited as the experience she had collected during that period.

Natasha’s career in the entertainment industry took off when her stand-up gigs started gaining traction. Soon after, several TV networks approached her to sing a deal with the company.

Besides acting, her writing gig also garnered her fame as an accomplished writer. She credited 6 times for major work in Television, including Insecure and Saturday Night Live (2014-2015).

Talking about her physical features, the fans of the TV series Insecure noticed that Natasha Rothwell had worked hard to gain weight loss. And the first two seasons of the show stood as the documented evidence of her astounding change.

Many of her fans flooded the social media platforms to acknowledge the effort she took to do it. However, many accused her of succumbing to the entertainment industry’s standard.

No matter, Natasha denied the accusations and admitted she was happy even when she was a plus-size actress.

As of 2020, Natasha Rothwell wasn’t married — and therefore, didn’t have a husband. However, she demonstrated her humorous side with funny tweets. And to stimulate fan’s desire to know about her relationship status, she even crafts a few boyfriend related tweets.

In 2013, she made a tweet about meeting her husband in Deal or No Deal. May that year, her tweet suggested that she was a married CPA. Interestingly, in the show Insecure, she portrayed the character who was a CPA.

In January of 2016, Natasha tweeted about her boyfriend and it was none other than British actor Idris Elba.

After all the tweets, Natasha Rothwell was not dating anyone (as of April 2020). Beyond humorous tweets, no evidence of a real boyfriend was spotted on her social media account. All in all, she was still leading a single life and abstained from relationships.