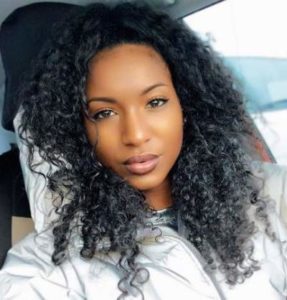 Netflix’s Outer Banks returned for its second season on July 30, 2021. New faces had been added to its cast and Carlacia Grant was among them.

Carlacia was otherwise best known for appearing in the 2016 TV series Roots. And after Deadline first confirmed her part in the American action-adventure/mystery teen drama in April 2021, we have been wanting to know all about her.

So, this Carlacia Grant Wikipedia is the perfect place and time to discover mostly about her boyfriend, ethnicity, and parents.

Carlacia Grant joins Outer Banks in a recurring role of Cleo opposite Chase Stokes, Madelyn Cline, Madison Bailey, and others.

Cleo is a confident, fearless Nassau girl and formidable artful dodger, whose world collides with the Pogues. Cleo, who is also interestingly named after Queen Cleopatra, grew up on the streets, her father having left her before her grandmother died.

Further, Carlacia’s character is actually a wild card entry belonging to none of the show’s group of Pogue teenagers.

On this show, she worked with Jonathan Daviss, Rudy Pankow, Austin North, Drew Starkey, and Charles Esten who were reprising their roles in season two.

So, Carlacia was very excited and hopeful for this journey of her career. Taking her overwhelmed self on Instagram, she had written this, before its release:

Carlacia prepared really well for the big job. She did a lot of her character development on the treadmill and during her cardio.

Also, she sported different hairstyles in her naturally black and curly long hair.

Her eye color and skin color are a beautiful shade of brown.

Carlacia Grant Parents, Where Is She From?

Carlacia Grant was born in New Haven, Connecticut. She was there until at least she performed her first acting role at age 13.

But, on Facebook, Carlacia cited Coral Springs, which is a city in Broward County, Florida, United States, approximately 20 miles northwest of Fort Lauderdale, as her hometown.

Then, she tried attending college but dropped out to move to New York City for acting gigs, and soon pursuing Broadway she roamed then, from New York to Atlanta, then to New Orleans, before finally settling in Los Angeles.

Basically, her upbringing brought her all around the world.

Regarding Carlacia Grant’s parents — they are named Karl Sr. and Carline Grant. The Grant folks seemed pretty supportive of their daughter pursuing acting as a career. When Carlacia was 13, her mom had entered her in a Miss Junior Teen Miami Division pageant and she of course won beating over 200 contestants.

Lastly, Carlacia also has one sibling.

Carlacia Grant being of Caribbean descent can also pull of its accent “very, very well.”

Until July 31, 2021, Carlacia Grant had 66K followers on her Instagram @carlaciagrant.

Carlacia also could be spotted on her ‘Carlacia Grant’ Facebook where she entertained close 1,196 followers.

Before the world knew about Carlacia’s Outer Banks stint, she had less than an estimated $300K net worth.

Carlacia describes herself as an actor, model, dancer, teacher/choreographer.

Carlacia credited her for her breakout role in the remake of Alex Haley’s Roots and Oprah Winfrey’s hit show Greenleaf.

In between, Carlacia as a model also worked for Le Chic Couture, Lily Pulitizer, Viola, among many other high fashion designers.

Right from her preteen years, Carlacia was convinced that acting for her was the ultimate goal, the only career that would fit her “gregarious” personality.

Thus Carlacia eventually acquired a bachelor’s degree in Theatre and Communications. She also trained with Marc Durso at Uta Hagen’s Acting Technique and with Gilda Pianelli at Eric morris system.

She had kept her love life relatively private, so if she was dating anyone, one could not tell.

Also, around the time of this writing, Carlacia never really discussed this part of her personal life on social media.

However, Carlacia’s several tweets on Twitter from back in 2010, implies she had a boyfriend then. Some of the mentioned tweets, as it is —

And if you want to see more of her onscreen romances, Lifetime’s Root series will just be a perfect choice, where Carlacia and fellow artist Sedale Threatt beautifully performs a loved-up couple, Irene and Tom.