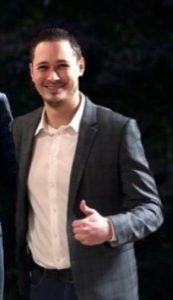 For those people who enjoy a healthy discourse on political and religious topics, Secular Talk AKA The Kyle Kulinski Show is a definite stop-by channel on YouTube.

Kyle Kulinski, the star of the show enjoys foreign policies and political discussion despite the show was titled secular. Kyle is best known for his unbiased scrutinizing commentary on the actual policy positions of elected candidates for a certain office.

The host backs his argument as a Social Democrat and a left-libertarian and recognizes himself as a proud progressive liberal.

This wiki-style article explores the life of Kyle Kulinski. So scroll down as it unfolds several details on your beloved talk show host.

Kyle Kulinski turned 32 years while celebrating his birthday on 31 January 2020. His mother’s Italian ancestry along with his father’s Polish-Austrian-Irish-Welsh-English predecessors gave him mixed ethnicity.

Almost little to no details on his family has been made public as of February 2020. But he had made a heartbreaking revelation that his father passed away to lung cancer when he was young.

All the responsibility to provide and support fell on the lap of his mother after the unfortunate loss.

Exploring the host’s educational background, Kyle went and graduated from New Rochelle High School in 2006 and attended Iona College, and graduated with a degree in Political Science in 2010.

Kyle started the channel Secular Talk, right around his college days. Him trying to juggle academic pursuit and personal stuff made his content on YouTube very sporadic.

In 2012, after his graduation, he gave his all to the channel for its growth. Each passing year, the channel developed exponentially with high production value without hampering the original appeal of the content.

With his detailed dissection of the political landscape of American policies and a complete breakdown to his viewers and audiences, the YouTube channel Secular Talk garnered over 804K+ subscribers as of February 2020.

With the 5 digit income flowing in from his radio show and YouTube channel, Kyle Kulinski’s $500k net worth is expected to see a burgeoning growth with his growing popularity among American politics enthusiasts.

It is pretty common for political figures and enthusiasts to get involved in a heated argument over certain topics and debates.

But once the opposition starts nitpicking details from the past and commentary made to dismantle your reputation, it creates quite a controversies for people to enjoy.

The tweets were offensive and racists towards the Black and the Asian community. His use of disparaging words for the gay community also became one of the highlighted issues during the controversy.

The witness of the commotion started questioning his political ground, as the made comments and his leftist belief didn’t go side by side. Owing to the incident, in December 2017, Kyle stepped down from Justice Democrats, an organization that he co-founded in January 2017.

The rumor of Kyle Kulinski being gay spread and surfaced even after his popularity didn’t provide any glimpse of his dating life.

But in a completely different context on 9 November 2016, the host of Secular Talk made it clear that he wasn’t gay with a reply to a tweet that read,

Though his sexuality dismantled the false fanfiction, as of February 2020, Kyle was yet to give out names of his past girlfriends and future wife prospects.

Andrew Gardner might be popularly known as a husband to his celebrity wife, Daniella Monet. Yet, his role as...

Multitasking in the world full of multitaskers, and standing rare in the task, might get edgy at times. But...