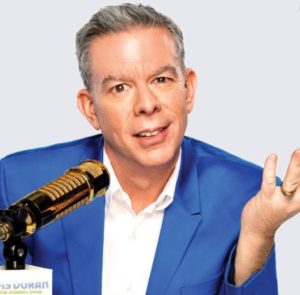 By all means, the wedding between Elvis and now-husband Alex was a grand affair. Held at Eldorado Hotel & Spa, the ceremony featured a Mirarchi band, food trucks, and several market stalls.

Tasked with organizing the wedding, Mark Russo revealed the theme of the bash as very Day of the Dead-like. Admittedly, the event was the most exciting thing that he ever did. 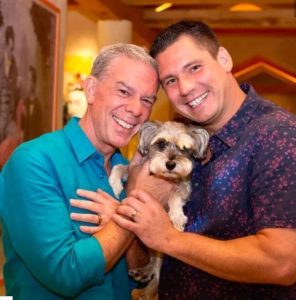 Elvis Duran got introduced to his now-husband Alex Carr around 2009.

To those unfamiliar, Alex is a Staten Island-based zookeeper. Using an umbrella as a prop, he popped the big question to then-boyfriend Elvis in July 2018.

Z100 New York – Elvis’ network – later officially broke the news of the radio personality and his partner zookeeper being engaged.

When Did Openly Gay Elvis Duran Came Out?

Before meeting Alex Carr, Elvis rarely opened about his gay identity. In 2015 PEOPLE interview, he explained,

“I just never talked about it. I was there to bring the fun and push the buttons. I never wanted it to become the ‘Elvis Is Gay’ show.”

Over time, Elvis had a change of heart. Feeling the need to share his personal experience, he eventually began talking about his dating life.

Elvis officially came out as a gay man in 2010. As far as the veteran RJ is concerned, he was “never in the closest.” Thus, he didn’t feel the pressure to come out from one.

At Elvis Duran and the Morning Show – Salary + Net Worth

Fans best recognized Elvis Duran as the host of the daily morning radio program “Elvis Duran and the Morning Show.” As of 2019, over 10 million people tune to the stated program daily.

For his contribution, Elvis gets paid $6 million in salary annually. Meanwhile, he flaunts a reported net worth of $20 million.

Working for WIOQ in Philadelphia, KBTS (now KGSR) and KBRE in Texas, Elvis had initially honed his craft.

A native of McKinney, Texas, Elvis Duran celebrates his birthday on 5th August every calendar year. As of September 2019, he is 55 years of age.

Believe it or not, the radio personality’s real name is the same as his stage moniker i.e., Elvis Duran.

Gabi Demartino is a Youtube star, most famous for featuring in the youtube channel, Niki and Gabi, which she...

For those people who enjoy a healthy discourse on political and religious topics, Secular Talk AKA The Kyle...