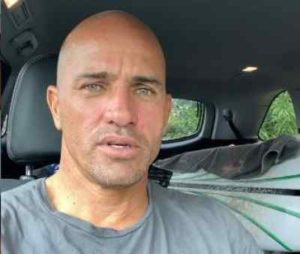 With an unprecedented 11 World Surf League championships under his belt, some have even dubbed him the ‘LeBron James of Surfing.’

Lately, in August 2021, he made headlines, not for his surfing accomplishments, musical appearances, or environmentalism and philanthropy but his role as a special correspondent on the epic new surfing competition show The Ultimate Surfer on ABC.

In the meantime, discover Kelly’s never before covered wife, girlfriend, and daughter-related stories.

Kelly Slater celebrates his birthday every year on the 12th of February. This makes him an Aquarius who reached the age of 49 in 2021. Also so you know, Kelly went by his first name, Robert, until 1st grade.

Young Kelly Slater grew up in his hometown of Cocoa Beach in Florida, where he still lives, alongside two brothers, Sean and Stephen.

He was born to his parents Judy Moriarity and Stephen Slater.

Occasionally on social media, one can spot him sharing the likes of “Happy Birthday, Dad. You were definitely one of a kind.”

As the son of a bait-store proprietor, young Kelly was spending most of his time at the beach, and by the time he turned five, he was already surfing.

By age 10, Kelly had made a name for himself as a talented surfer, winning age-division events up and down the Atlantic coast. In 1984 he won his first age-division United States championship title. Two years later and Kelly finished third in the junior division at the world amateur championships in England. The next year, he won the Pacific Cup junior championship in Australia. And just like that, he turned professional in 1990.

Kelly Slater acquired Syrian-Irish descent from his parents and their ancestors. His mother is of Irish descent and his father was of Syrian ancestry.

Until 25 August 2021, Kelly Slater was not on TikTok. But, he had 2.7 million followers on his Instagram @kellyslater.

Also on his ‘Kelly Slater’ page on Facebook, he entertained 1.9 million followers.

He mostly made fun of these pages, pointed out absurdities, and tackled serious subjects like the cutback.

Kelly’s Kelly Slater Wave Company, which he founded in 2007, is kind of a big deal to surfers wanting to practice away from the actual ocean. Even the World Surf League invested in the company in 2016.

Moving on, in 2020, Kelly was in news for his real estate collaboration with Michael Schwab to build a $250 million, 400-acre surf resort in La Quinta, California.

Does Kelly Slater Have A Wife Or A Girlfriend?

Now that you have been wondering about Kelly Slater’s wife, he had never been married before August 2021. But, over the years, he sure has had relationships with some iconic and beautiful famous women.

Here are all of Kelly Slater’s past girlfriends.

Now, in recent times (in 2021), Kelly Slater is more than ever in love with fellow professional surfer Kalani Miller.

For the longest time, Kalani has been featuring on Kelly’s social media and Kelly on hers. They are equally good when it comes to expressing their love for the other. 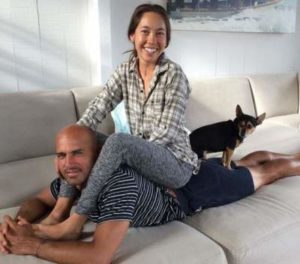 One of Kelly Slater and girlfriend Kalani Miller’s “finest and not so finest moments” (PIC: Kelly’s IG

About Kalani — she grew up in a small beach town of San Clemente in Orange County, California with sisters Oleema and Hana Miller. Growing up in a family of surfers, designers, and lovers of the sea, Kalani found passion in surfing, modeling, and traveling.

Kalani is the proud and successful co-founder of MIKOH in collaboration with her sister Oleema, a former sponsored professional surfer. MIKOH has grown to include swimwear, ready-to-wear beach cover-ups, clothing for travelers and dreamers, and MIKOH X SURF, a line of surf-ready pieces in smartly cut neoprene.

That been said, Kalani did not yet seem engaged to Kelly as of Aug 2021.

How Long Has Kelly Slater And Kalani Miller Been Together?

We saw Kelly Slater and Kalani Miller together on social media, 22 August 2021. And at the time, he was “thinking seriously about moving to Mexico” with Kalani.

So, at the time of this writing, they were still together and closer than ever. They have been together since 22 September 2007.

Around November 2020, many had speculated on their rumored separation.

Kelly Slater has a daughter, Taylor Slater, with his former girlfriend, Tamara.

As Taylor was born on 5 June 1996, she turned 25 in 2021. She is on Instagram @itstaylorslater (with 15.7K followers). Professionally, Taylor is a multi-medium artist, and in her words, in search of ways to recreate the natural world’s effect on human emotion.

In 2018, it was headlined Taylor’s art show in Montauk was a huge success.

And while we know Kelly is super supportive of Taylor producing beautiful works from resin and paint on wood to incredible photography to stunning short films no one knew what his baby mother thought of it.