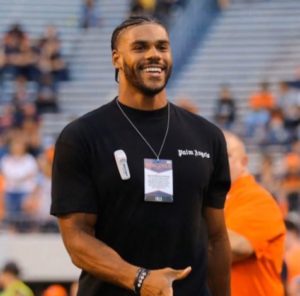 Sydney McLaughlin, a gold medalist in the Women’s 400m hurdles at the Tokyo Olympics, got engaged three weeks after smashing her own world record time of 51.46 seconds. She accepted the proposal from her former NFL player boyfriend Andre Levrone Jr.

Andre Levrone Jr. celebrates his birthday every year on 9 March. He turned 26 years old in 2021.

Andre Levrone Jr. was born to his father Andre Levrone and his mother Angie Levrone in his hometown of Laurel, Maryland, United States.

Andre Sr was a linebacker for his base team, served in the marine corps. Whereas, Angie was a high school MVP for three years in track & field, gymnastics, and cheerleading. Andre’s parents celebrated 36 years of a successful marriage in October of 2020.

Andre Levrone Jr. grew up in a family military. He has an older brother named Jonathan Levrone who was an army who served in Iraq. Whereas, his maternal grandfather was a colonel in Arm Force and also served in special forces.

Besides his brother Jonathan, he also has a sister named Raquel.

On Instagram, Andre Levrone Jr. went by the name (@dreistheway). He gathered 40.2k followers on his platforms and posted nearly 124 times as of this writing. Moreover, he is on Twitter with 2204 followers.

He is also on Facebook with a 1.5k friend and hasn’t updated anything since May of 2014. However, he couldn’t be discovered on TikTok.

Andre Levrone Jr. NFL Career, When Did He Retire?

Andre Levron Jr. loved football from a very young age. At times, he wouldn’t even do his homework because he was busy watching football. His father was 6′ 6″ and his mother was 5′ 8″, but even in his junior year in high school, he was only 5′ 6″.

He attended Our Lady of Good Counsel High School. In high school, he played wide receiver and safety under the tutorship of head coach Bob Milloy. In the first game of 2012, he suffered an injury and didn’t return to play until the final three games of the year.

The school team was selected first-team all-combine of the US Army All-American Junior Combine. Not only that but Andre also received the title of Top Performer out of the 30 participants from the state of Maryland at the Army All-American Combine by MDHigh.com. His high school career also earned him a three-star player by 247sports, ESPN.com, Rivals.com, and Scout.com.

Initially, Andre wanted to join USC but his mother didn’t allow him to go to California. So, he committed to the University of Virginia. He didn’t play any games in 2013. In the 2014 season, he played in 12 games and missed several games because of his injury.

Andre Levrone Jr. was undrafted out of college but was signed by the Baltimore Ravens and spent parts of three seasons with Baltimore, Carolina, and Jacksonville. Even though he had several national and international opportunities, his passion for football faded away. Hence, he retired from football at the age of 25.

Andre Levron Jr. sits on a total net worth of over $200 thousand.

What Does Andre Levrone Jr. Do Now?

Andre Levrone Jr. earned his bachelor’s degree in Mass Communication and Media Studies in 2017. He earned a Maryland DLLR license in December of 2019. His volunteer experience includes working with ACE Tutoring, UVA Children’s Hospital as a student-athlete volunteer, and Kingdom Over Culture as a fundraising coordinator.

Sydney McLaughlin And Andre Levrone Jr.: Wedding, Any Kids Yet?

Andre Levrone Jr. and Sydney McLaughlin have been together at least since December of 2020. She made her debut on Andre’s socials on 27 December. As a caption, he wrote, “Heaven sent ❤️.” Then, she again appeared on his IG on 22 April.

The former NFL player has his parents as a role model for a successful marriage. So, it didn’t take him very long to recognize that Sydney was the one for him. He proposed the Tokyo Olympics gold medalist at Four Seasons Resort Scottsdale at Troon North.”

“Who is this coming up from the wilderness, leaning on the one she loves?…” -Song of Songs‬ ‭8:5‬,” Andre concluded the post.

Whereas, Sydney wrote a lengthy post. She shared about how he was the one she had hoped for, he had everything she wished in a man she would love. She also stated him to be the God-fearing, passionate, honest, loving, hard-working, protective, and genuine man she ever met.

After elaborated words of love for her man, she wrote, “You’re the perfect man to lead me, and I cannot wait to follow.” 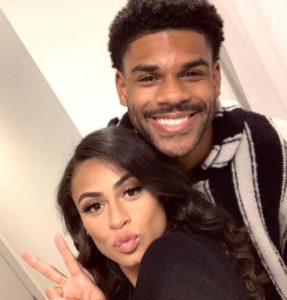 Andre Levrone Jr. and Sydney McLaughlin shared no information on their wedding. And, they don’t have any kids as of this writing in late August 2021.