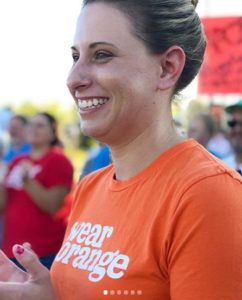 In October of 2019, online searches for congresswoman Katie Hill rose exponentially after her nudes were leaked on social media.

Being muddled in the sex scandal with two of her campaign staffers— Morgan Desjardins & Graham Kelly, her male legislative director — she had to step down from her position as a Democratic congresswoman.

Katie was treated as a rising star of the Democratic party who fell for the foul play of her ex-husband Kenny Heslep following the indictment, killing her career.

Delve into this wiki-style article we’ve brought you along with the updates on Katie Hill.

Katie Lauren Hill was born on 25 August 1987 to Rachel Stevenson, a local registered nurse by trade, and Mike Hill, a police lieutenant. She is a Santa Clarita native who attended Saugus High School and graduated in 2004.

Katie enrolled and was accepted to study nursing at Mount Saint Mary’s University in Los Angeles, California. Witnessing a teen passing away with a gunshot made her realize she couldn’t eradicate social problems being a nurse.

Following that, she enrolled at California State University and graduated with a bachelor’s degree in English and a Master’s of Public Administration.

Katie started her career managing a non-profit organization named People Assisting the Homeless (PATH). She held the job of executive director and managed a $50 million budget. Her service there, rewarded her with $174,000 a year, making a huge contribution to her burgeoning net worth.

When President Trump won and took the office, her instinct to pursue a career in politics blossomed. She discussed her campaigning strategy for congress with her family and friend at a local Chili.

To everyone’s surprise, she not only succeed in the primary but defeated Steve Knight, a Republican candidate. She tore down the two-decades-long Republican representation of the region.

The way she and her team moved during the campaign made her staff believe Katie might as well become a senator or House Speaker. She was named vice-chair of the prestigious House Oversight Committee.

Katie, after he resigned from the position of a congresswoman has yet (March 2020) to reveal about her new job. Though, like the time before, she takes her political opinions to her Twitter handle.

Nobody knew what she had planned for herself, but her supporters and well-wishers awaited her return to her former glory.

Katie Hill was married to her long-time boyfriend Kenny Heslep. 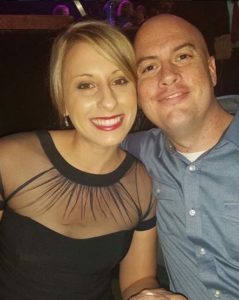 Katie and Her ex-husband Kenny back in June 2019 (Pic: Katie Hill’s Instagram)

She met Heslep when she was working at Barnes & Nobel. The pair bonded over the mutual love for the book and fell for each other. This all happened before she joined her study of nursing.

Then the in-love couple got married in 2010. The pair was acting seeking an interested partner for their polyamorous relationship. They met a woman on OkCupid.

When she was in her campaign and met Morgan Desjardins, Heslep participated happily.

Heslep took the picture of Katie, brushing the hair of Morgan, there. Another picture featured both Kaite and Morgan, kissing each other. Both pictures were taken, Katie claimed when she didn’t take notice of it.

More on that, Morgan noticed Heslep’s unbearable and controlling behavior towards Katie. At this time around, the throuple relationship was getting sour, as Heslep had started barging on Morgan.

By October 2018, the married couple had parted away. After Katie won the election, she moved to D.C. and was in a new relationship.

Back in her hometown, Morgan, and Heslep discontinued their relationship.

When the Summer of 2019 came around, Kenny Heslep had already filed for divorce. And following the sex scandal, the couple’s divorce was finalized that very year.

On 2 March 2020, Katie made a huge announcement of having a new girlfriend after the life-changing incident she went through.

Before that, she was involved in a polyamorous relationship with her ex-husband Heslep and her campaign staff Morgan Desjardins. Morgan and Katie met each other in the fall of 2017. 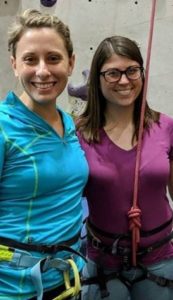 Morgan was offered to be the campaign’s third-person which she eventually accepted. The relationship grew intimate and they fell in love with each other.

As for the details on her new girlfriend, Katie was yet (March 2020) to disclose the name of her mystery beau whom she hinted about.

Regarding the announcement, commenting on the Page Six article of her Katie noted,

Before meeting her new girlfriend, Katie was dating a Playboy political correspondent Alex Thomas. The relationship started after she moved to D.C.

Kenny Heslep rose to the national spotlight as the estranged husband of former Democratic congresswoman Katie...