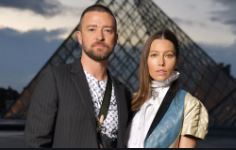 In November 2019, Justin Timberlake was photographed getting handsy with “Palmer” co-star Alisha Wainwright at a New, Orleans-based bar.

All About Alisha Wainwright Including Her Ethnicity

When the photos of Justin flirting with Alisha went viral, the “Mirrors” crooner issued an apology via Instagram. Admittedly, he displayed a powerful alcohol-induced lapse of judgment. In his own words,

“I drank way too much that night and I regret my behavior. I should have known better… “

Further down his IG post, Justin insisted on focusing on being the best husband and father to wife Jessica Biel and daughter Silas Randall Timberlake respectively.

Reunited & solid, Justin and Jessica spent the Holidays together. However, when the New Year kicked around, the cracks in their marriage was beginning to show. A close source revealed that “The Sinner” producer was still upset at her husband.

The very insider accused Justin of making big promises but never sticking to them.

About three months after the PDA scandal involving Justin and Alisha, fans began to speculate the worst.

According to a fan theory, Jessica was divorcing Justin after she was snapped without sporting the wedding ring in late-Feb 2020 in Beverly Hills while running errands.

A week after the divorce rumors first arose, Jessica and Justin took to Instagram and celebrated the “Mad About The Boy” songstress’ 38th birthday.

With the respective posts, Jessica and Justin essentially discredited the stated fan theory about them divorcing.