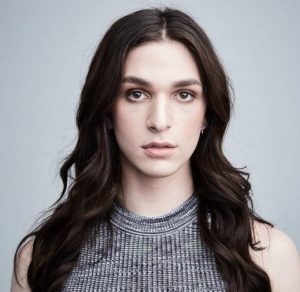 Eve Lindley made her way into the cast of AMC’s anthology TV series, Dispatches From Elsewhere that premiered on March 1, 2020.

It featured several names up in the lights like Jason Segel, André Benjamin, Sally Field, and Richard E. The series depicted the fictional tale of four strangers who come across each other by a hidden game of Jejune Institute.

Eve took on the role of one of the main characters, Simone. The show aired a whole episode focusing on her backstory on March 2.

For being transgender, the crew was hesitant of Eve to have a leading role. But to their surprise, Eve received many positive feedbacks as she stood her ground against more accomplished co-stars.

The admirations began to flood in from most of the audience and she was on her way to becoming the fan’s favorite.

Learn more about her sexual transition and life story as you tag along with the article.

Is Eve Lindley Transgender? Before Transformation

With a heart for barbie dolls and beautiful makeups, Eve was born a male. Her physical transformation began at the age of 18 when she was first introduced to hormone pills.

“I didn’t want him to be unhappy. I loved him then and I love her now.”, her father summarised his love for Eve in a beautiful way.

Her father had always been supportive of her whereas her mother on the other hand, never supported Eve for who she was on the inside.

Eve’s father privileged her with good psychologists and doctors. He even moved the family to a more progressive neighborhood so that his child wouldn’t have to worry about bullying and her decision makings.

He portrayed an excellent example of an ideal father and what unconditional love should be about. Without him, Eve would never have burst out of her cocoon in this judgemental society.

Her father, Brad Lindley, and her mother — who preferred to remain anonymous — divorced while Eve was only two years old. They shared joint custody of the kids.

Her parents were never in mutual agreement with Eve’s figuring out her sexuality. As her father was always on the supportive side, Eve chose to spend most of the time with him after the divorce.

She has two elder siblings, Lucia Curley and Darah Lindley. They both were supportive of Eve and always treated her like a sister.

Eve also trained herself at art school at the Fashion Institute of Technology.

Eve Lindley had an enthusiasm for the entertainment industry since her early days. She always hoped for leading female roles but had a hard time finding it.

Eve was happy when she finally landed a female role as Mama Morton in the series Chicago. But she was devastated after finding out later that the character comes out as male.

What’s more, Eve worked for Broadway shows like The Book of Mormon, Aladdin, Cinderella, and Rock of Ages until she got a chance to Debut in Katie Holmes’ All We Had.

More movies and TV shows started making their way to Eve. She then worked on All We Had, Mr. Robot and Outsiders, and many more.

Eve’s role in Dispatches from Elsewhere in 2020 was the breakthrough that put her into the limelight.

Reportedly, Eve Lindley stands tall at the height of 5 feet 9 inches. Her net worth was estimated at $750 thousand around 2020.

Finally being able to break the ice on her career, Eve Lindley didn’t want more rumors added to her name. She chose to keep all her dating life away from the media.

Fans’ speculation on the partner she would date was on the rise along with her rising popularity. The crevasse on the fans’ base on whether her boyfriend would be a trans or a male opened up. Entitled to their opinions, the fans had their argument on what she would do.

With all the fuss going on, Eve was busy with the filming of all her shows and movies. She might be focused on building her career and might shed light when everything falls into place.

Talking to newnownext.com in April 2020, Eve Lindley discussed her experience filming “Dispatches From Elsewhere.” Per the interview, her manager was the one who handed the actress the script. Admittedly, she was drawn to Simone — her character — immediately.

When Jason Segel first witnessed Eve audition for the role, he knew she was the one. The “How I Met Your Mother” star even called her for help to flesh out her character.

On Season 1 Episode 7, Eve and Jason shared an intimate scene. According to the actress, it was her first on-screen kiss. What’s more, she had a strep throat at the time which compounded to her nervousness.

All We Had Dispatches From Elsewhere Jason Segel Mr. Robot Outsiders

From working as a minor character in her first show Bone Chillers to landing a major role in the famous TV...