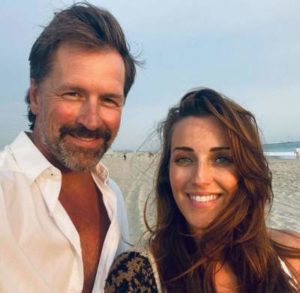 Good news for the Hallmark channel star fans — In July 2021, the Canadian actor Paul Greene announced that he was becoming a dad for the second time.

Amid the congratulations flooding in, discover all about the baby mama/fiancé Kate Austin.

Kate Austin reached the age of 41 on April 23, 2020. She is six years younger than her “amazing partner in love & life” who plays Dr. Carson Shepherd on the Hallmark original series When Calls the Heart.

Kate Austin’s father passed away when she was young. So, she cannot count on one hand the number of brief conversations they had. She shared, she was never given any presence, time, or teachings from a father.

She is, however, still blessed to have her mom, Patricia Dawn, in her life. So, on Mother’s Day, Kate writes the likes of:

“Forever grateful to have this magical woman as my mum and my dad and the ultimate ride or die for life! Mumma!! No matter what she has faced it’s always done with a can do attitude and love. She’s taught me so much about life, about non attachment, freedom, liberation and joy.”

Kate Austin is under 5’6” tall in height when standing alongside Paul in his 6’1”. With a natural ginger-blonde hair color and perfect pair of blue/hazel appearing eyes, and other features Kate makes for an extremely beautiful woman.

Meanwhile, Kate’s Twitter @Freedomalchemi1 had only 13 followers after she joined in Aug. 2018.

Professionally, Kate is an Australian brought-up actress and life strategist.

Other than that, Kate also has acquired a long list of film and television, theatre, musical theatre, and commercials credits on her. And before that, she had an Advanced Diploma of Performance training.

Then, talking about her entrepreneurial background, Kate has shared, she was hustling in business from such a young age.

Kate started her first company when she was 19 and has been an entrepreneur since she was 16. That, since then she had had success and plenty of failures, hard knocks, experienced losing it all and starting over.

Today, Kate is also a proud freedom alchemist and curatorial strategic intervention coach providing alternative and holistic health services to her clients. At the same time, she was also studying virtually for her master’s degree in NLP (neuro-linguistic programming).

So, as of 2021, Kate Austin was still engaged to the “most romantic, thoughtful, joyful, loving man” that she believes has ever existed.

Via the oldest living tradition, Paul Greene had gone down on his knee and Kate of course had said Yes, on May 26, 2019. And before that happened, the “freedom junkies” had started dating sometime in 2014.

Seven years later, and they were expecting a young one in 2021’s Thanksgiving. In an exclusive with PEOPLE, both Kate and Paul explained their first time experiencing parenthood together.

The mom-to-be said she is thrilled about becoming a mom but that she has never felt that she needed a child to be complete. Instead, she said it was Paul being an “amazing father” to Oliver that changed her feelings about parenting.

Kate has been vocal about what made her fall in love with Paul was “seeing his immense love and dedication to being a dad to his son who is now a high school graduate and pursuing entrepreneurial adventures.

Just like that, thanking Paul, Kate has often Instagrammed how since having him in her life, she felt so seen, loved and sure of her infinite capacity to love deeply and create love and freedom in the world.

Back to the talks of pregnancy, the process so far had been good for the soon-to-be parents.

“Paul: Kate has had the best pregnancy. No issues at all. She listens to her body and has been very active throughout all of it.”

Also, hoping to encourage older women not to fear childbirth, Kate exchanged “If a woman is fit and healthy, then it is fine to be older when giving birth.”

The couple revealed they were opting for a natural birth and until that time, they had not yet exchanged their wedding vows.

Not to miss, until July 2019, they were sharing Culver City-adjacent home with Paul’s son Oliver. But, PEOPLE lately reported the new baby will be born in Los Angeles. Then after a few weeks, the new family will head for their 3,500-square-foot A-frame vacation cabin on Lake Arrowhead in the San Bernardino Mountains.