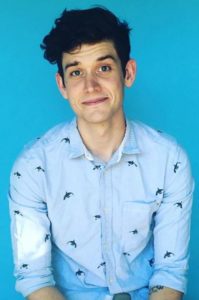 Netflix’s catalog of comedy genre was graced with Brews Brothers when the show was added to its library. The TV show, which premiered on the 10th of April 2020, could be one of the comedy success the video streaming platform required.

With the premiere, the spotlight has been directed on the stars who had worked hard on making the show a must-see. And Mike Castle is one of the leading stars to focus on during the show.

With his almost a decade-long experience working in improv, play and on camera, Mike hasn’t hesitated to give his all. This wiki-article explores the life, romantic escapades, and career of the actor so scroll down.

Mike Castle was born on 27 February 1989. The famed actor touched 32 years old while celebrating his birthday in February of 2021.

As per the date of birth, his zodiac sign is Pisces.

Mike Castle was born to his parents: Kate Liston-Castle and Gregory Castle as Michael Castle. The family raised all three of their children in Beverly, South Chicago, Illinois.

Gregory, Mike’s father was serving as the president of labor relations for Fairpoint Communications, an internet and cable television service provider based in North Carolina.

The “Vanlife” actor is siblings with his two older brothers Kevin Castle and Sean Castle.

Talking about his education, he attended St. Barnabas Elementary School. Following that, he joined Brother Rice High School and graduated from the same.

Getting into his physical features, the Clipped star stands at a height of 6 feet 3 inches (1.9 meters) with a bodyweight of 73 kilograms (160 lbs).

Mike Castle has inked a few tattoos on his body. On his upper part of the right wrist, he’s got a ’42’. Similarly, he has another one on the inner part of his left arm which appears as a kind of symbol and few letters.

Despite having an impressive catalog of work Mike Castle has done, the existing social media reach makes us believe that he is a gem yet to be discovered by many.

As of the time when this article was penned in July 2021, he flexed a total of 9.5 thousand followers on IG. However, Mike’s verified Twitter account had 7.8 thousand followers. But, sadly his Facebook account couldn’t be discovered.

Like many, Mike Castle started with a dream to be an actor. But he started honing his talent early on. After performing in the school’s production of The Wizard of Oz, his fondness for acting blossomed.

Keeping the same dreams in mind, Mike started attending acting workshops and improv groups to further sharpen his skill. During his teens, the dream appeared more tempting and started performing at Second City, UCB, and iO.

Along with the stage performances, Mike slowly slid into the camera lenses acting in short films and TV shows. In 2011, he landed the role of Randy in The Ghosts. Following that, he starred in a TV series named Harder Than It Looks (2012).

In 2020, Mike portrayed Adam in a Greg Shaffer-created TV series Brew Brothers. The show explored the story of two rival brothers who must work together to keep their brewery in business, but shenanigans keep foaming up their company with chaos.

As of 2021, Mike Castle was still married to the prestigious Emmy nominated actress Lauren Lapkus.

Mike and his wife Lauren tied the knots on 5 October 2018. The wedding transpired in a courthouse ceremony. Following that, an intimate dinner party was organized. 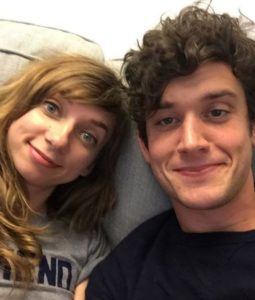 Mike and his wife Lauren together on 6 March 2020 (Pic: Mike Castle’s Instagram)

Neither of the pair had spilled the beans on who exactly they got in touch with each other. The way Mike avoided the huge arrangements for its frivolousness, surely he wished to keep his private affair a secret.

As per his Instagram post on the 6th of October 2018, Mike expressed the thrill of his best friend becoming his wife.

In May 2021, Lauren shared that she and Mike were expecting a baby girl. She labeled their bundle of joy “Rainbow Baby”. The couple announced the birth of their daughter, Holly in July that year.

Netflix extended its comedy section with the newest offering titled Brews Brothers (2020).  And with the...