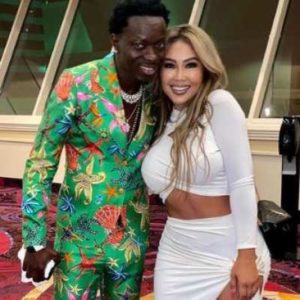 Congratulations are for comedian Michael Blackson and his girlfriend Miss Rada. They got engaged to be married and revealed the footage of the moment on Instagram on July 22, 2021.

Amidst the good news coming in, discover all about the One Night In Vegas star’s girlfriend in this Miss Rada Wiki.

Even though Miss Rada does not look a day over 25, some people believe she is actually twice that age. They more than assumed, she celebrated her 50th in 2020.

Then, Rada, herself had mentioned her birthday was right on the corner around April 25.

Ethnicity-wise, Miss Rada is a Cambodian and her nationality is American. Every year, she feels proud in celebrating Cambodian new year’s day.

Once, in an IG post, Rada shared how her sister will always send her pics reminding her that she and her family came a long way from the jungles of Cambodia.

About Rada’s family: Her father is no longer alive. She occasionally writes about him on her IG posts. She, thus, revealed she has only one picture of her dad and wishes they had more time together.

Then, there is her tough/courageous mother. Rada is forever grateful for her mother who kept her kids alive while escaping the concentration camp of the killing fields.

Rada is also thankful for her two sisters and brother.

In May 2021, her beau Michael had also joked about meeting her sisters. To footage of them enjoying at a certain party, Michael had captioned:

“Ran into @mzradadarling sisters in Ghana, about to give Rada a nephew and a stepson at the same time modafucka”

And so in March 2021, they celebrated their second anniversary.

Although publicly known as Miss Rada, it is not her real name. And that was not yet revealed at the time of this writing.

Then, her 38-25-40 inches bust-waist-hip measurement has not changed than her throwback semi-miss high school body. Meaning, the plastic surgery speculations just appear to be another fan-made rumor about her.

Meanwhile, Rada had 323 followers on her Twitter @mzradadarling after she joined in Oct. 2019.

Professionally, Rada is a realtor with much experience in buying, selling, and investing.

From what indeed.com calculated, the average salary for a realtor in the United States is $84,274 per year.

IMBD also credited her for ‘self’ appearances on The Real and VH1 Couples Retreat TV series.

Lately (July 2021), Michael took to her Instagram to clarify — Rada is not a gold digger like her haters call her. He insisted that her beau never asked for a penny from him.

“She’s very independent and she’s actually the one that takes care of me plus I’m allowed a side chick a month.”

On July 22, 2021, Michael Blackson stopped by “The Breakfast Club” and at the end of the interview, he called Miss Rada over to him to of course get down on both knees and ask her to marry him. The sweet moment had soon gone viral.

Michael said “I’ve never had a woman that’s this loyal to me” and Rada who was caught completely by surprise said she will be changing her last name to Blackson when the wedding goes down.

That been said, Rada does not have any baby and had never been pregnant before July 2021.

Also, July 2021 marked their 2.5 years together. Recalling those first meetings in Vegas with his ” Asian Jollof”, he shared this caption on his IG (with 5.2 million followers):

“What happens in Vegas stays in Vegas unless she has a phat ass, can cook, clean and don’t mind a little bladder infection”

Michael is a Ghanaian stand-up comedian, known for his performances on BET ComicView and Shaq’s All-Star Comedy Jam. Also in 2013, he had notably appeared in the film One Night In Vegas.

How Many Kids Does Miss Rada Have?

Miss Rada has no kids. But, her fiance, Michael, has three kids from his previous relationships. His eldest child (son) is Michael Jr. and the second born are twins named Niko and Noah.