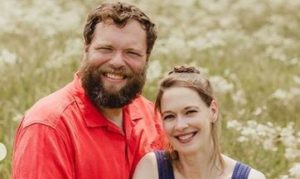 Congratulations are for The Incredible Dr. Pol star Charles Pol and his wife Beth Oakes Pol. The couple is now proud parents of two, and “excited to continue this adventure called parenthood”.

But how much do you know about Beth Oakes Pol? Well, if the answer is “not much”, we got you cover over on this short bio.

Beth Oakes Pol was reportedly born in 1979. So, that would make her 41 years of age in 2021; five months younger than her husband Charles.

She celebrates her birthday on November 25 and is of the Sagittarius zodiac. Likewise, Charles celebrates his on March 6 and holds Pisces zodiac.

Information Beth Oakes Pol’s biological family wasn’t available. But we can confirm this that, they weren’t as popular as the family she went on to be a part of.

Her father-in-law, Dr. Jan Pol is a veterinarian who was featured on the Nat Geo Wild’s reality series, The Incredible Dr. Pol. He practiced veterinary medicine in Harbor Beach, Michigan, and established Pol Veterinary Services in 1981.

As for Beth’s mother-in-law, she is Diane K. Dalrymple Pol from Mayville, Michigan.

But did you know that all of her parents-in-law’s children were adopted? Yes, inducing her husband Charles and his two sisters Diane Jr. and Kathy Pol.

Mentioning her distinct features, she has brown eyes, naturally dark hair, and an oval face.

However, that didn’t stop her from appearing over her in-laws’ social media. If you want to see more of her do check Diane Pol Jr’s Twitter @Diane_Jr with 5K followers and Dr. Jan Pol’s IG @thedrpol with 457K followers then.

Beth Oakes Pol’s career remained a mystery to us. However, we do know that she wasn’t a veterinarian like her father-in-law or a producer like her husband.

Given her IMDB profile, which credited her to over 12 episodes over Incredible Dr. Pol, we may as well title her as a reality star.

In light of this, Beth’s net worth couldn’t be estimated.

But Beth’s husband earned handsomely, and she was entitled to it. He was a producer and an actor who co-produced The Incredible Dr. Pol back in 2011. Aside from that, he has also worked in the TV series The Legend of Sheriff Gus Skinner (2013), and Drunk & Disorderly (2012).

Talking more about his job, Charles was an executive producer of Straight Shooters Entertainment for almost 2 years. Also, he has been the operations coordinator and production of Nickelodeon for over 5 years. Some other reputed companies he worked with are Booya Studios, Sony Pictures Entertainment, Mirage Enterprises, Parkway Productions, and Paramount Pictures.

In light of his education, Charles graduated from Central Michigan University in 2001 and went to join the University of Miami (2001 – 2003) for his bachelor’s. Previously, he went to Chippewa Hills High School, which we believe was the same school Beth attended.

Beth Oakes Pol first met her future husband while she was just three. Yes! The two were school friends who went on to get married over 3 decades later.

However, it wasn’t until 2017, the couple “discovered” that they had feelings for each other. So, without wasting any time, Charles proposed to Beth during their 2018 vacation in England, and they held their wedding the same year.

In January 2021, Charles then shared their wedding pictures for the first time over his IG. Also, the ceremony was featured in an episode that aired a week later.

Sharing the good news about his grandson’s arrival, Dr. Pol took it to his IG to write,