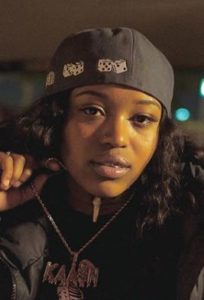 Kaash Paige is an American singer/rapper best known for her 2018 hit single ‘Love Songs’. The song peaked no. 2 on Spotify’s Global Viral Chart with 6 million streams. In the same week, Love Songs was charting on Apple Music too.

The video for the song was released on 14 February 2019. The directing credit was given to Kaash Paige and Matthew Nicholson.

This a wiki-type article that brings you details of Kaash Paige so delves into it.

She was raised with her brother in Grand Prairie. Moreover, Kaash celebrated turning 19 years of age on 8 January 2020.

Kaash’s family fell apart when her parents got divorced when she was in high school. Her name Kaash is an acronym for Kill All Arrogance Stop Hatred.

As a teenager, Kaash took a keen interest in sports. She was even in Choir.

In an interview, Kaash cited TDE, Erykah Badu, Mac Miller as her influence.

Getting into her physical features, Kaash stands at a height of 5 feet 8 inches (1.7 meters).

On her IG bio, Kaash proudly writes “I make music for the soul 💔.”

Before the break out single Love Songs, Kaash Paige released her first song ‘Dnd’ (Prod. by Dream Koala) on Soundcloud in 2016. In 2017, she came back with songs titled ‘Uber You To My Oasis’ and ‘Orange Sweater’.

In 2018, Kaash released songs like Mindset of a Playa, Depression, Soberiety++, and Geeked Dab.

Kaash released Dayummm Freestyle at the end of 2018.

In 2019, Kaash released multiple singles like Wyca, Happy Song, and the video for the latter was released in September the very year.

Kaash’s debut EP, Parked Car Convos was released in November 2019 under the recording label Def Jam Recording. The EP stood on no. 13 on the R&B/Soul chart.

In late-2019, Kaash mentioned her debut album Teenage Fever to be released soon as she was done with it.

Moreover, Kaash boasts several tattoos. She has 777 on her neck and multiple tattoos on her hands and fingers.

What’s more, Kaash is in the initial phase of her career though she is estimated to have accumulated a net worth of $350k.

Around early 2020, Kaash received a co-sign from the R&B starlet Alicia Keys.

Kaash Paige became a viral sensation with a love song. But in her interviews, she stated the song was made without anybody on her mind.

As of February 2020, Kaash seemed intended to keep her dating and boyfriend and girlfriend status a mystery.

An openly bisexual woman, Kaash never wanted her sexual identity to define her music or sway opinions. Talking to Dallas Observer in Dec 2019, she opened about using her queer identity to her advantage.

Also in the very interview, Kaash told a story involving her girlfriend prospect and a female friend. According to the songstress, her homie stole her partner.

Of all the performances in Euphoria, none seemed to strike more chord with the fans than the character who...