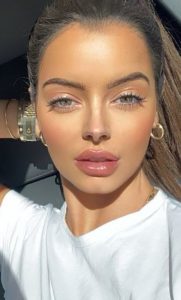 Maura Higgins is best known for her unapologetic attitude, sharp wits and cutting comments during her time in Love Island. She is one of the most loved contestants to walk through the door of the Love Island villa for her no-BS personality.

Maura Margaret Higgins came to Love Island hailing her Irish descent. She was born to Seamus Higgins and Sharon Higgins on 25 November 1990 in County Longford, Ireland.

Maura’s parents were always supportive of her being in the show. When she left the villa securing 3rd position, her father Seamus gave her a warm homecoming welcome at the airport.

On August 5, 2019, Maura announced she was joining This Morning and was thrilled for the opportunity. She presented the show alongside Phillip Schofield and Holly Willoughby.

In 2020, Maura was presented with an opportunity to join season 12 of Dancing On Ice which aired on ITV on 5th January 2020.

With all the projects she has ventured on, Maura is expected to see an upward slope on the chart of her net worth.

More From Us:  Details unfolded on Anna Vakili from Love Island

Maura Higgins kept on seeing Curtis Pritchard, her Love Island(2019) partner even after she left the villa. The long-distance relationship continued for the reason being Curtis’s obligation to be in the UK for Love Island (2019). 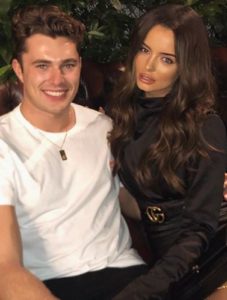 The couple started dating each other when Curtis ended his ongoing relationship with fellow contestant Amy Hart.

It was interesting for fans when they found that the couple knew each other before joining the show.

Dancing With The Stars judge, Brian Redmond gave shared some details with Irish Mirror in 2019 that read,

“Marura knows th show because she has been a brand ambassador for Bellamianta, who are the tanning company for Dancing With The Stars. I believe Maura had been out a few times to watch the show and apparently she and Curtis had cast eyes at each other across a busy dance floor years ago.”

In an interview with Irishtatler.com Maura revealed she had had only one first date before she came to villa.

Contrary to her claims, reports surfaced that Maura was engaged to be married to James Finnegan, a car salesman in 2013. Before they could see the end of the aisle as a husband and wife, the relationship met its end in 2017.

After the break-up, Maura started dating Shane McGuigan – a boxing coach – who worked with sports vets like David Haye.