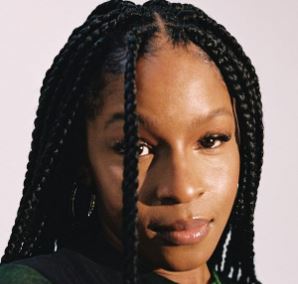 Delving deep into the deceptions of online dating, Julie Adenuga appeared as the host to MTV’s Catfish UK which premiered on April 21, 2021. She co-hosted the show alongside the writer, director, and journalist, Oobah Butler who penned the 2019 bestselling book How to Bullsh*t Your Way To Number 1.

So, who is Julie? Let us take a look at her off-screen life; especially about her relationship over this article. (Skip to the end of just want to learn about her husband/boyfriend).

Julie Adenuga was 32 years of age as she hosted Catfish UK in 2021.

She celebrates her birthday on July 15, making her of the Cancer zodiac.

Julie Adenuga comes from a family of six. Her parents, Ify Adenuga and Joseph Adenuga Sr are both Nigerian immigrants, who brought up their kids on a London council estate. Being a Nigerian immigrant, Julie’s parents faced quite the challenges, which Ify included in her memoir shared over the internet.

Over one of the memoirs, Ify mentioned that she met her husband Joseph at the Top Rank bingo club in the UK. She was enrolled to study business management at the time and stumbled upon her co-worker Joseph at the bingo club. They went on to marry later in the early 90s.

Talking about Julie’s siblings, she has three brothers. Her two older brothers, Skepta and JME, were famed musicians, who have played huge stages at Glastonbury and Wireless. As for Julie’s younger brother Jason, he is a producer/graphic designer/artist, who has worked on Skepta’s album Konnichiwa.

Trivia: Skepta and JME’s are both fathers, and their pregnancies collided in 2018. According to their parents, Skepta broke the good news just a few hours before  JME and his wife revealed theirs.

Mentioning her distinct features, Julie has brown eyes, thinner eyebrows, and she mostly put her hair in braids.

Also, she had a Youtube channel named “Don’t Trust The Internet” who she posted her content from JuliesTop5​.

A journalist and radio presenter by profession, Julie first stepped into the limelight launching the creative media house Don’t Trust The Internet in 2020. However, she has over a decade of experience as an entertainer working with mega-brands such as Apple, MTV, Nike, VICE, YouTube, and GRM Daily.

Thefader.com even labeled her as the “Most Trusted Voice In U.K. Music”. In an interview with them, Julie shared that at no stage did she “sit down and read a book about [DJing]”, rather her knowledge comes from watching her older brothers make their way to the top.

Apart from hosting shows, Julie also used her gifted talents to create a playlist. Find her music over Spotify that included hits like Ballhog, Part Ah Keep, Tell Me Something I Don’t Know, and Focus.

Overall, Julie deserved her hard-earned recognition. She shared that she wanted people to see, only what she wanted them to see. “Everything doesn’t have to be shared even though they might be the most important things in my life. Do you see Beyoncé’s Instagram? That’s how I want you guys to look at my career,” she added.

If you follow Julie Adenuga over Twitter then you should be familiar with the jokes she often does about her boyfriend. Back in 2014, she tweeted,

But she never revealed what was the reference all about.

Also, Julie joked that her boyfriend once asked her if she had life insurance.

Despite all the antics, Julie never revealed his name as of 2021. The only thing she let us know about him was that he had “very serious issues with lint.”

Also, judging by her posts, it didn’t seem like she had a husband then. In April 2020, she was sliding through her dating app, where she found out a fact — “All men on dating apps own dogs.”

Recalling one of her dates, Julie shared that she and her guy were on a bus in Palmers Green, and he started lying. He said that he knew Skepta and Jme, not knowing that she was their younger sister! Guess, they never went on a second date after.