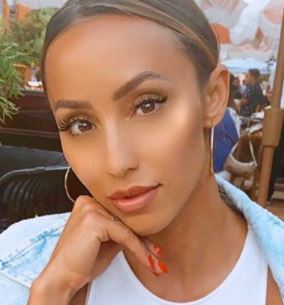 Jovi Nicole was in the limelight in August 2020 as she married the NFL linebacker, Manti Te’o. But while you may know Jovi as the wife to Manti, she is also a star of her world.

The fitness enthusiast, Jovi Nicole is a physical trainer and a beauty consultant. She offered several online programs, starting from $50 per hourly session.

Get to know more about Jovi Nicole though this wiki-style article.

Corresponding to her birthday, Jovi is of Capricorn zodiac.

As for her hobby, Jovi loved to go to beaches. Over Instagram, she was often seen on the sand or ocean in her swimsuits.

Fun Fact: Jovi and Manti were married on the beach as well.

Jovi Nicole’s full name is Jovi Nicole Engbino. She was born to Hawaiian/Filipino and Japanese parents.

Also, Jovi’s parents once appeared over her Instagram picture in 2014. Her mother was a real beauty, while her dad brought his Asian looks and long hair.

As for her siblings, her small brother was seen in one of her TikTok videos, doing the “Downsouth” lipsync.

Mentioning her nationality, Jovi is American.

Spending most of her time at the gym, Jovi Nicole loved to post her workout over Instagram. She was often seen flaunting her rock hard abs and super toned 33-24-35 inches measurement body.

Also, Jovi employed her accomplishment to compete in beauty contests as well. She is a two-time nationally qualified NPC Bikini contestant.

According to the August 2020 data, Jovi entertained 30.2K followers over Instagram @jovinicolefitness and 37 followers on Twitter @FitnessJovi.

She is a certified Personal Trainer having 2 competitions under her belt. In 2020, she was working for Point Loma Sports Club.

Also, she was the trainer for Kitima Chaimongkol who came third in the “Bikini competition” in April 2019.

Apart from her job as a trainer, Jovi also worked as a beauty consultant at Skin & Skinnier. Reportedly, she was a receptionist there and also posted videos on the office’s Instagram account of their client’s workout routine.

You may like – Sam Bird Wiki: Kailah Casillas, Height, Net Worth, Age

Jovi Nicole and Manti Te’o were married on August 29, 2020. Their wedding was held in La Jolla, California, and accompanied by their lovely dog.

The next day of the wedding, Jovi let her fans know the good news through Instagram. She shared, how happy she was to marry her “best friend” and although that wasn’t how they envisioned their ceremony, “it was perfect” 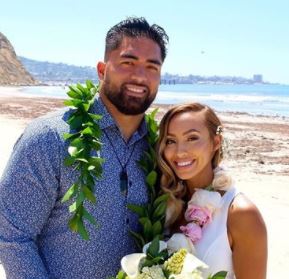 Jovi Nicole with her husband Manti Te’o at their wedding (Source: Jovi’s Instagram)

Also, Manti expressed his happiness over Instagram with wedding pictures of them captioned,

“I couldn’t give you the world but I think I did better…I gave you my last name and it looks good on you Mrs. Te’o.”

Reportedly, the duo began dating back in early 2016 and it wasn’t until Feb 29,2020, Manti popped the question. On the same day, Jovi took her excitement to Instagram, flaunting a picture of a beautiful diamond ring.

Just in case you don’t know about her husband, Manti Te’o — he came 38th overall by the San Diego Chargers in the 2013 NFL Draft. In 2017, he signed with the New Orleans Saints.

Also, before dating Jovi, Manti fell victim to a catfishing scandal; he had a terminally ill girlfriend (that never existed).

When COVID-19 pandemic was hitting hard in the US, all the major league football game was in halt due to the...