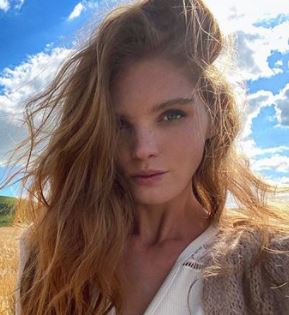 Just saying the words out loud “Victoria’s Secret model“, you can grab anyone’s attention in the fashion industry. Now, imagine being the top Victoria’s Secret Angel and the coveted position that comes with it.

Yes, securing the glory was non-other than the Britsh supermodel, Alexina Graham. According to “therichest.com”, she was ranked the top net worth Victoria’s Secret model in 2019.

So, let us take a look at how the life of a supermodel differs from a common one. Also, learn about Alexina Graham’s husband and boyfriend as the article proceeds.

Born Mar 3, 1990, Alexina Graham grew up in a small town near Nottinghamshire in the Midlands. Unfortunately, Alexina’s parents (Sarah and David) were divorced, when she was just a baby.

After the split, Alexina went on to live with her mother Sarah and stepfather Paul, and her half-sibling Elle.

Alexina’s mother, Sarah mentioned that Alexina’s biological dad was never on the scene. She shared,

“Paul (step-father) has been in her life since she was two, so he’s always been her father figure.”

Reportedly, Sarah’s mother owned a shop and was an ex-model herself Her biological father was a university lecturer, and her stepdad Paul was a “binman”.

Apart from this, Sarah loved dancing and theater since childhood; which she credited to have eased her in front of the camera and audience. Also, she participated in the Ford modeling competition while she was almost 18.

Then after 18, she moved to New York and then to Paris to pursue her career in modeling.

However, Sarah’s mother shared that Sarah first went into modeling to save up for the university. Reportedly, she originally planned to get a degree then train as a “midwife”.

As for her ethnicity, Alexina is White.

But life hasn’t always been so forgiving for Sarah. As a teenager, Sarah was taunted for her look and called names such as  ‘carrot top’ and ‘giraffe”. She shared,

“I was very skinny, I had bright red hair, braces and no boobs at the time. I was an easy target.”

However, the traits that she was bullied for became her greatest assets. By 18, she placed third in the Ford Supermodel World competition and starred in a Burberry ad.

Also, in 2019, Alexina was named the first redhead Victoria’s Secret Angel. And with her presence on the billboards, she had become the ginger-pride icon and inspiration to many. Moreover, she strived to empower children who were being bullied.

As a top model, Alexina worked hard to maintain her voluptuous body. In 2019, she was seen working on a boxing routine with her trainer, Joe Holder.

Talking about her diet, Alexina chose the “80/20 diet”. She ate healthy foods 80% of the week while she cheated on the next 20.

Starting modeling back in 2008, Alexina became the top Victoria’s Secret model with a stunning net worth of $108 million in 2019.

While we don’t know what she liked to spend her money on, Alexina did have an epic lingerie collection. However, she didn’t have to spend a single penny of her own on it. She shared,

“I have at least 100 bras. Victoria’s Secret sends me everything. I keep them neatly folded up and organized by type in my chest of drawers at home.”

Alexina Graham was reported to have contracted coronavirus back in March 2020. While all of us were worried about her well being, some of the fans wondered about who Alexina lived with; Was it her husband, boyfriend, or her family?

Doing some background check, it seemed that Alexina mostly spent her time with her sister Elle and her two kids (Alexina’s nephews). So, it’s most likely that it was Alexina’s family in England who took care of her during the illness.

As of August 2020, Alexina had fully recovered and was up and running. However, she shed no light on her husband or boyfriend. It’s understandable that being in the model industry, Alexina wanted to keep her dating life private.

Chrissy Teigen lately gained notoriety for her wittiness, innocence, and genuineness, and probably is the...