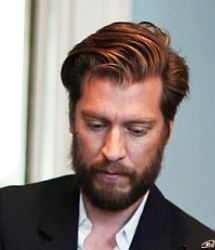 The photographer, Jonathan Leder is a name known to the fashion industry as a “low tech king”. And we say this because of Jonathan’s specialty to produce vintage, black and white, and classic photographs.

He mostly used film or Polaroid for his images. Reportedly, even his images around 2020 were shot using an old Polaroid “Big Shot” camera.

In May 2012, Jonathan found himself alone in a house with a Polaroid camera and aspiring model, Emily Ratajkowski. They took some of the fan’s favorite photographs but, Emily confessed that something more happened between them that night.

Eight years later, Emily alleged Jonathan of sexual assault though NY magazine and it rose quite a spark in the industry.

Let’s take a deeper look at the case as this wiki-style article continues.

Jonathan Leder Wiki: Who Is He?

Jonathan Leder is a photographer who first started his career as he turned 15 with a 35mm film and a Canon Pellix. Reportedly, he moved to Europe for a while and professionally pursued photography as he returned at the age of 24.

Originally, he lived in NYC, (Brooklyn) and later moved to Woodstock in 2011.

As for his other half, Jonathan Leder had a woman named Amy Hood. Like every great artist, she was his muse. However, it wasn’t clear if she was his wife or girlfriend.

If you are searching for his Instagram, Jonathan deactivated his account @jonathan_lede duo the controversy he was on in 2020.

Coming to the allegation on Jonathan Leder, Emily Ratajkowski detailly explained about what happened in May 2012.

According to her, Jonathan had her come to his upstate home for an unpaid photoshoot for a magazine called Darius and it required an overnight stay.

Upon arriving, Emily discovered she would be modeling lingerie. The duo shared a red wine and went on with the lingerie photoshoot.

Later, Jonathan asked her to get naked and Emily shared,

“The second I dropped my clothes, a part of me disassociated.”

After the shoot was done, Jonathan and Emily “huddled under a blanket on the couch” and began to have conversations. Emily recalled that she was wide awake but “very, very drunk”.

Soon, Jonathan rubbed her feet together and put his “fingers suddenly inside” of her. In her words,

“Harder and harder and pushing and pushing like no one had touched me before or has touched me since. I could feel the shape of myself and my ridges, and it really, really hurt. I brought my hand instinctively to his wrist and pulled his fingers out of me with force. “

After the incident, Jonathan scurried silently into the darkness up the stairs and Emily went to bed.

The next morning, Emily caught a train home.

In response to the accusations, Jonathan Leder strongly denied Emily’s claims. He mentioned it to be an “outrageous allegation” and added,

“It is grotesque and sad that she is so vindictive to lie in such a way to the press routinely.”

“Vindictive”, because Emily claimed that Jonathan used her photos from that day without permission. She shared she signed no release neither she was paid.

Reportedly, Jonathan used the photos in the book titled Leder/Ratajkowski that was sold for $80.

As for Jonathan’s recollection of the day; Emily flew herself from Los Angeles to New York City, and then took a bus to Woodstock, where he picked her up in the afternoon.

He then cooked a light dinner, and they started shooting.

Furthermore, 30 mins into the nude photo shoot, Jonathan realized that Emily was one of the most comfortable models he ever worked with in terms of her body. In his words,

“She was neither shy nor self-conscious in any way. To say she enjoyed being naked is an understatement.”

Then they had a “great time, good conversation,” and worked late into the night.

As for the book “Leder/Ratajkowski” that might have started all the controversy, it was filled with sensual photos and published by Imperial Publishing.

Michelle Buteau is an American actor, stand-up comedian, and podcast host. Among her varied work, she is...