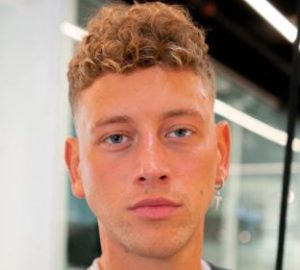 Five episodes after Too Hot To Handle premiered, Joey Joy arrived just in time to rescue Carly Lawrence from her post-Chase breakup blues. And not only was he able to steal the “man-eater” Carly’s heart, but he also stole a rule-breaking kiss from the beauty.

So, who is he? Keep reading this Joey Joy Wiki and find out.

Joey Joy On Too Hot To Handle

Even during the COVID-19 filming restrictions, Too Hot To Handle found a way to deliver us its second season by moving its production from Mexico to Turks and Caicos Island. The season premiered on June 23, 2021, and just a few episodes in, we knew it was going to be even more steamy and scandalous than the last one.

Joey Joy first appeared on the season’s episode six, and without delay, Carly fell hard for him. “Joey’s really cute,” she said in a confessional.

However, Joey first had his eyes set on Melinda, and it was only an episode later he turned to Carly. The two then went on to share some cuddles and even a rule-breaking kiss.

According to Carly, Joey checked more of her boxes than Chase ever did. She liked the fact the Joey was “more cuddly,” and he reminded her of herself. “More like dorky, weird,” she said.

As for Joey, he shared that his “game plan” was to be himself and stay himself.

This goes without saying but Joey Joy was single before he entered Too Hot To Handle. So, here comes the main question, did Carly ever became Joey’s girlfriend?

Well, judging by Joey’s socials, he didn’t post any spoilers about how his and Carly’s relationship turns out before July 2021. However, he recently mentioned Carly on his cryptocurrency account over BitClout as he “reclouted” a message on how Carly’s digital coin was about to explode due to her THTH popularity.

Though this doesn’t hint anything about their relationship, it surely tells us that the two were on good terms then.

Joey Joy was reportedly born in 1993. That would make him 27 years of age as he first appeared on Too Hot To Handle in 2021.

He celebrates his birthday on July 15 and is of the Cancer zodiac.

Joey Joy didn’t share much about his family, vocally or even over his socials. However, his IG bio once displayed three flags representing the United States, Greece, and Italy; which could be a hint at his family lineage.

Also, we were informed about two of his older cousins name Calley Connelly, and Cullen Connelly. The latter was a Community College of Beaver County aviation student, who worked as a farmer at  Soergel Orchards. In 2021, he lived in  Franklin Park, Pennsylvania with his girlfriend Taylor Tusa.

Talking about Joey’s hometown, he hails from Gibsonia, PA — an unincorporated community in Allegheny and Butler counties in Pennsylvania, north of the city of Pittsburgh.

Apart from his tall stature, Joey’s distinct features include a long face, mysterious blue eyes, and a chiseled jawline.

Trivia: Joey already has an IG fan account @joeyjjoyfans. That last we checked, it had 6 posts and 46 followers.

Before joining Too Hot To Handle, Joey Joy had yet to direct his career; and was just working the register at a convenience store.

Joey is a Business Administration student who graduated from Westminster College in PA. During his time there, Joey was actively involved with the Westminster football team and even led them to a Division III championship during his senior year.

Joey Joy garnered a net worth of under $200 thousand by 2021. Just in case you are curious, a convenience store cashier’s average salary was $22 thousand per annum then.

But it’s almost sure that Joey wouldn’t go back to his job at the convenience store. Maybe he will choose to pursue the modeling/sponsored content route, like many other reality stars before him.

Fun fact: Joy was once featured in an episode of the Jersey Shore.