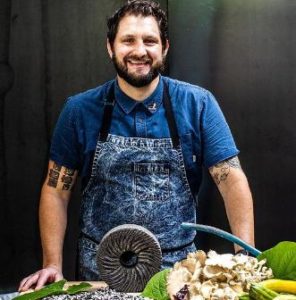 Gabe Erales is a Bravo TV’s Top Chef Winner who went home with the title and a grand prize of $250,000. He was a formidable contestant and a master of Mexican cuisine. Learn more bout him in this Gabe Erales Wiki.

Gabe Erales joined Top Chef as one of the 15 Contestants on season 18 of Bravo TV’s Top Chef Portland. He made his way all to the finale with the other two contestants with his eyes on the $250,000 grand prize along with the title of Top Chef.

As the finale neared, Gabe created some of the best dishes he ever did on the show. He opened up with pig head cheese, followed by a scallop, and tepache aguachile. In the third course, he made a short rib with mushrooms and a cicilo negro mole and closed with a candied squash with cafe Mexicano ice cream. The entire menu was a hit with everyone.

Gabe Erales celebrates his birthday every year on 3 July. This earned him Cancer by zodiac sign. However, his age was yet to be known but it appeared he was above 42 years old as of 2021.

Gabe Erales from Top Chef is of Mexican nationality who moved to El Paso, Texas and where he grew up later in his life. He moved with his family to the states but more on that later. His cooking has been highly influenced by his Mexican heritage or his parent’s family background.

Gabe Erales grew up in El Paso, Texas, west Texas to be more precise. However, his parents hailed from Mexico in the Yucatan, Penninsula, Quintana Roo, to El Paso. His mom was always cooking for a big family and it influenced his cooking.

In December 2015, Gabriel wished his mother happy birthday. In there he wrote: “Wishing the happiest Birthday to the strongest, smartest, kindest, and most beautiful Mother I know. How she raised seven kids and remains sane is beyond me but I am everything am I today because of her and her giant heart. And she can cook her ass off. #dearmomma”

Talking about his mother Gabe shared, “The majority of my ethos as it relates to food, sourcing, and cooking was inspired by Mother. Growing up in a family of nine, she was so efficient in cooking elaborate meals that brought a sense of togetherness for a very large group.”

She used to make him cochinita pibil which he included in the menu in his restaurant. It’s a pork braise that is wrapped in banana leaves and cooked in sour oranges, annatto seeds, chiles (it’s bright red), and served with pickled onions and habaneros.

As for his father, Gabe shared a snap in November of 2014 with his brothers and his dad sitting inside 80s Ford Escort. He wrote, “How many Mexicans can my Dad fit in an 80s Ford Escort? #6!!!! #FBF @m_erales”

Despite the huge influences in cooking, Gabe kept quiet about details in his mother and father, including their names.

Coming to the details on his siblings, Gabe Erales grew up with 5 brothers and a sister. Most of his family members built a career working in restaurants.

Furthermore, the chef weighed 94 kilograms (207 lbs) as of this writing.

Furthermore, he can also be discovered on Twitter where he goes by @g_erales with 95 followers. He made over 3200 tweets in total. Also, his Twitter is private.

More from us, Gabe is also on Facebook where he hasn’t posted anything since June of 2020.

Besides his mother, Gabe Erales decided to dabble into cooking at the age of 15 when his brothers joined the restaurant business as their after-school jobs. But, the food that his mother cooked and that she fed were the ones that influenced him to become a chef.

As he stated: “That was my way of making money ever since I started cooking with an exception of a brief period after school… I started as a busboy at Steak and Ale, moved to prep, and worked in restaurants all through high school.”

Later on, Gabe moved to Austin, Texas where he attended the University of Texas. He supported himself in restaurants and studied engineering. He earned a bachelor’s degree in Mechanical Engineering.

Gabe ONCE shared: “While I was studying, I was working in restaurants and basically running from school to work, and from work to studying.”

After graduating from the university, he landed a job at General Motors in Detroit where he worked as a designer. But, Gabe started missing cooking and being in the kitchen so he jumped back into the kitchen to work as a chef.

Some of the notable restaurants where Gabe has worked include Fonda San Miguel which was created by Miguel Ravago where they offered do nixtamalization and fresh masa in-house daily, La Condesa under Rene Ortiz, Odd Duck, and Qui. His strongest culinary influences came from Noma’s Chef Rene Redzpepi, Mexico’s Diana Kennedy, and Dai Due’s Jesse Griffiths.

Gabe was also involved with Johson’s Background Garden which was his first introduction to a farmers market. This is the point where he started doing business with local farmers.

But in March of 2020, pop-up chef Peter Barlow threw a ‘tantrum’ when eating at much-vaunted Austin restaurant, Comedor. Later, Gabe shared snapshots of insulting messages allegedly sent by Peter as well as a receipt showing a $0 tip from the chef after eating there.

According to Gabe, Peter dined at Comedor on 29 February 2020 and was initially upset that he wasn’t there. Whereas, Peter shared that he ordered two cocktails and a “Crudo we didn’t even eat” from the restaurant’s menu.

The message sent by Peter stated: “I expected a lot more. Your caliber of attention was missed. This trip [to Austin] was based to see you and eat. Fucking major dissatisfaction.”

Whereas, Gabe wrote: “I’ve never encountered a chef that felt so privileged to insult a team because they did not get treated like they were celebrities. Sorry, I missed you at the restaurant.” 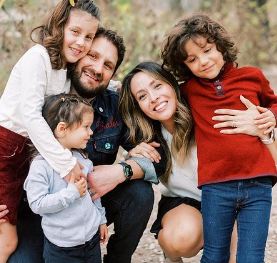 Gabe Erales and his wife Linda Young with their kids (Pic: Gave’s IG)

Since then, Gabe and Linda share their life with their four kids: a son named Ezrah, and his three daughters Gabriella, Penelope, and one other anonymous kid.

According to Gabe’s wife’s Facebook, she worked at Indeed in December of 2015. Then Linda quit her job in Indeed to join Facebook.

More From Us: Joey Joy Wiki: Too Hot To Handle, Height, Girlfriend, Age