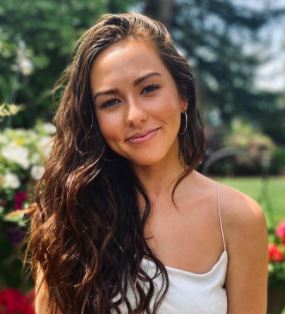 Rumors had that Abigail Heringer was going to be a major face this season on The Bachelor 2021. To win over Matt James, Abigail would be competing alongside the pool of 43 contestants including one of Matt’s ex, Madison Nelson.

As the season is sure to be filled with dramas, Abigail will be put through tough trials on the show. But with the support she garnered from her fans and family, Abigail will emerge victorious, with or without the title.

Here is everything you need to know about this lovely lady over this wiki.

Corresponding to her birthday, Abigail is of Pisces zodiac.

In 2020, Abigail was living in Portland, Oregon.

Abigail Heringer grew up in her hometown Salem, Oregon alongside 3 siblings. She has an older sister named Rachel, who attended Willamette University. Rachel also was her roommate and worked as an account manager for an insurance company in Portland.

As for her parents, Abigail was born to Weston Heringer III and Suzie Heringer. Her father, Weston was a pediatric dentist while her mother, Suzie lived as a housewife.

Also, Suzie spoke to a local newspaper in Salem, Oregon about Abigail joining The Bachelor. She said,

“She’s always made us proud, and she’s got a really good head on her shoulders, so I’m not worried about anything. Hopefully, she’ll have fun. I jokingly told her to remember her grandparents will be watching.”

The family of 6 were on good terms with each other before 2020.

Abigail Heringer was born deaf. She suffered from congenital hearing loss and it wasn’t until the age of 2, Abigail first got her cochlear implants. Reportedly, she was the youngest patient to undergo cochlear implantation surgery at Oregon Health & Science University.

Also, it was Abigail’s mother, Suzie who revealed the story. She annotated that if Abigail’s “disability” could impact one other person then it was worth sharing the story.

In 2020, Abigail Heringer was furloughed from her job, to give her fullest for the reality show, The Bachelor.

She previously worked as a Client Financial Manager at Opus Agency. Joining the company in Feb 2020, Abigail was responsible for” managing and implementing strategic financial processes and procedures for client programs and drives client event budgets” there.

Before joining Opus, Abigail had 2 and half years of experience in financial data analysis and budget management. She worked for companies like The Holt Group (Jun 2019 – Feb 2020) and RVK, Inc (Jun 2017 -May 2019).

For training, Abigail interned at Suite 4 in Social Media Marketing and Umpqua Bank as an audit.

Abigail is also an accomplished junior golfer. Moreover, she worked in  “Player Servies” at Creekside Golf Club and was a golf shop assistant at Langdon Farms Golf Club.

In light of her education, Abigail has a diploma from South Salem High School (2009 – 2013). Later, she completed a 4 years Bachelor of Science course from Linfield College in 2017.

Abigail Heringer’s net worth was under $200 thousand in 2020. Just in case you are curious, an average salary for a finance manager is in Portland, Oregon was around $47,019 per annum.

Trivia: She volunteered as a food server for St. Barnabas Episcopal Church for over 5 years.

Abigail Heringer was chosen from among more than 6,500 applicants for Matt James’s season of The Bachelor. She went under a background check, a psychological exam, and medical testing, just so she could find “the one” there.

However, Abigail’s mother believed that it wasn’t the right platform to meet people. She also pointed out that Abigail was “frugal” so it might not be the best place for her to hang around.

(Spoilers alert) But Abigail already received Matt’s first impression rose over the show. She was on her way to win over Matt and make him her boyfriend.

Details on Abigail’s previous dating life wasn’t available. Like Matt, it would be Abigail’s first time dating someone onscreen.