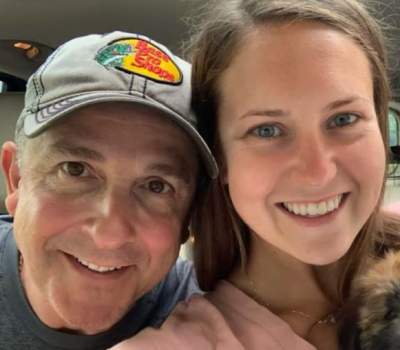 Dave has been a household name among National Geographic channel viewers since he debuted on the show, which is based on the lives of commercial tuna fishermen in Gloucester, Massachusetts, in 2012.

Anyway, here’s a ‘Jess Boardway Wiki’ covering all that you have been prying around.

As a Gemini born on June 12th, Jess Broadway reached the age of 35 in 2021. This makes her 21 years younger than her fisherman beau.

Her real name is ‘Jessica’ but almost everywhere except for professional reasons, she is known by the shortened name ‘Jess’.

Jess’s parents are Gene and Susan Boardway of Granby, a town in Hampshire County, Massachusetts, the United States.

Further, Jess has a sister Alyssa Boardway who studied Occupational therapy at Springfield College and went to Granby High School. As she turned 27 on April 16, 2021, she is eight years younger than Jess.

Other people in Jess’s family are her cousins Brittany, Alyssa, and Sydney.

Jess Broadway stands to an outstanding height that is above 5’8” or 1.73 meters.

So far, one could get through Jessica Broadway socially only on Facebook or via her work-related email: jboardway@gloucesterschools.com.

Anyway, Jess shared a regular glimpse from her personal life on her Facebook page, and among them are also her seemingly well-treasured moments with Dave. While also referenced his girlfriend among his 20.4K followers on Twitter. Back in April 2018, they had loved his sense of humor in a tweet, “You have no idea how bad I really am … twice as bad in real life. My girlfriend sleeps in the garage.”

IMBD has credited Jess for her appearance on Wicked Tuna in a 2018 “Changing the Tide” episode. She, of course, was seen as Dave’s girlfriend.

The show last aired its Season 7 (Wicked Tuna: Outer Banks) episode on October 18, 2020, and Dave too was part of it. Wicked Tuna is a documentation of the journey of commercial tuna fishermen who fish for the lucrative Atlantic bluefin tuna in the North Atlantic Ocean.

Over the course, Dave battled with the teams of fishermen like him to see who can get the most profit out of catching the fish. Five times, Dave became the winner under his captainship of FV-Tuna.com, and the other two times he ended up being the runner-up. The last time, he won was in 2019 and he caught a total of 19 fish and collected $120,318. Then, during the 2020’s season, he became the runner-up with 10 fish caught and $63,152. He had lost to Hot Tuna’s T.J. Ott by fewer points.

While her famous boyfriend earned his living from TV/endorsements, and public speaking or doing Boat Shows, Jess also herself managed almost an estimated $600K net worth (before May 2021).

Further, from what indeed.com calculated, a teacher based in Gloucester, Massachusetts earned a $16.07 per hour salary on average.

Jess Boardway had never been engaged or married before June 22, 2021. Although it is public knowledge that she has been dating Dave Carraro for a while now.

Their relationship timelines as far back as August 2016 on Jess’s Facebook page. So, in July 2020, Jess announced becoming a family of three as they welcomed not a baby boy or a girl but a “cutest and fluffiest” little pup named Nathan. To a picture of them with Nathan, Jess had written, “Meet Calvin!”

Jess shared about the times when they out for dinner and checked in to Niles Beach during March 2020 or when they attended an event at Port Everglades Ft Lauderdale Cruise Terminal, a year before in April.

Other than this, the couple mostly remained low profile. Dave, the renowned captain/owner of F/V-TUNA.COM, despite being a public figure for the past ten years kept his personal affairs away from the media and public eyes.