Just in: NBC News and TODAY correspondent Savannah Sellers is engaged to her partner Alex Yaraghi. After Savanah displayed her diamond engagement ring via Instagram on June 22, 2021, people have been prying about Alex, the man kneeling before her with the marriage proposal. So, who is Alex?

Find out in this Alex Yaraghi Wiki.

Alex is the son of Amir Yaraghi and Kathy Yaraghi from Cavetown, Maryland, in the United.

Also in the family are his Hoboken, New Jersey living brother Nicholas (Nick) Yaraghi and sister Jennifer Yaraghi who is based in Washington, D.C.

Nick is a Ph.D. holder and materials research scientist II at Modern Meadow and Jennifer is a technical recruiter at Motion Recruitment. Each one of the Yaraghi siblings boasts outstanding academic profiles.

Alex got his MBA from Georgetown University from 2015 – 2017. He also completed his B.S. in Finance from the University of Maryland College Park and went to Saint James School Alumni. Not to miss, Alex also trained for a Chartered Financial Analyst (CFA) Charterholder certification.

Until June 22, 2021, Alex Yaraghi entertained 638 followers on his Instagram @alex.yaraghi.

Since March 2020, he has been involved as a part-time Executive In Residence at Georgetown University.

Before joining the team at Cohen & Steers in June 2017, he was with Strategic Value Partners as a senior associate even before that, with the PwC company working for Financial Instruments, Structured Products, and Real Estate.

This way, he amassed above an estimated $700K net worth. From what glassdoor.com calculated, someone like Alex as an Investment Analyst from New York City earned a $102,619 salary on average.

The co-host of Stay Tuned who believed that they were visiting her native San Diego, California, to attend the US Open and a cocktail party later that night, was given “an epic surprise” by her now-fiance Alex Yaraghi. So, they got engaged at the cliffs at Torrey Pines, which is a beach they and have hiked many times with their families.

Alex got down on one knee and had a photographer capture the whole thing. The couples had a few minutes just to themselves until their siblings were running down the beach. 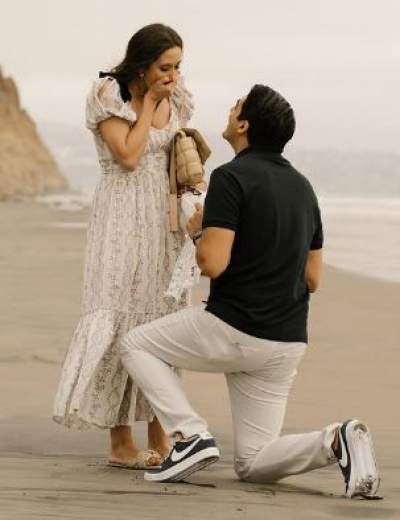 After that, Alex and Savannah headed back home and where Alex had gathered both their parents. A surprise party was planned to celebrate the couple’s relationship milestone. Even their friends had flown in from all over the country. This way, Alex had actually planned an entire weekend.

The youngest anchor at NBC News went on describing, the day almost felt like a wedding to her.

Pretty much inseparable ever since they met at a bar in New York City’s West Village, on Sept. 16, 2017, they are considering having a destination wedding in Italy. Proud of her bonding with Alex, Savannah shared:

“It always just felt so easy with us. There were no games and there was no stress, just someone who immediately felt like my partner. He felt like home. I keep saying, ‘I can’t believe we just met at a bar and now we’re getting married!'”

The couple has never been secretive about their relationship. They are often seen on Savannah’s Instagram @watchsavannah holidaying at Grand Canyon, The Colosseum, Vail Mountain, and more.

Best known for her piece “Heroin: Hooked in America”, Savannah attended the University of Colorado, and shortly after graduation she was picked up by the NBC news team for the Nightly News. She was awarded the 2017 Emmy Award for the category ‘Annual News & Documentary’ and won many other accolades for her work with the NBC news team as well as her original piece.