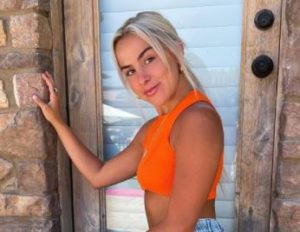 The basketball beauty, Hanna Cavinder and her twin sister Haley signed deals with Boost Mobile and Six Star Nutrition in July 2021. This was their first major endorsement deal, for which they flew all the way to New York.

Stay with this Hanna Cavinder wiki and learn all about the basketball star.

Corresponding to her birthday, Hanna is of the Capricorn zodiac.

However, her dad and mom — Tom and Katie Cavinder — were both desk working people now. They together worked at Tom’s national “independently-owned” elevator company called Southwest Elevator Company.

Reportedly, Hanna’s dad established the company back in October 2003, and her mom joined in as an HR controller and coordinator in 2009.

As per Tom’s Linken in profile, Southwest Elevator Company worked with customers to customize projects and provide the right options for their vertical transportation needs for maintenance, modernization, installation, and repair.

Born and raised in Gilbert, Az, Hanna has three more sisters aside from her twin Haley. They are — Brooke, Brandi, and Natalie

Hanna Cavinder stands tall at a height of 5 feet 6 inches (167 cm). She was almost the same height as her twin sister Haley.

As of July 2021, Hanna flaunted 257K followers over her Instagram @hanna.cavinder and 3.3M followers over the twins’ joint account @cavindertwins. Also, their Youtube channel “Cavinder Twins” entertained 67.3K subscribers then.

Hanna Cavinder garnered a net worth of under $300 thousand by 2021.

Popular as one-half of the Cavinder twins, Hanna alongside her sister shot to fame with their dance challenges, lip-sync videos, and basketball tricks over TikTok. However, their popularity growth was gradual and it wasn’t until 2020, the two began to trend over the platform.

According to Hanna, although they were happy about their growth over the TikTok community, their number one goal was to excel on the court.

In light of her education, Hanna graduated from Gilbert HS and went on to study business at Fresno State in 2019. She and her twin then lead Fresno State to the WNIT two years later. That year, Hanna was named to the All-Mountain West section for the second straight season.

Also, Hanna earned the title “Mountain West Player of the Week” on Feb 15, 2021, following a sweep over Air Force.

Is Hanna Cavinder On WNBA Yet?

No, as of 2021, Hanna Cavinder wasn’t on WNBA. The WNBA required players to be at least 22, to have completed their college eligibility, to have graduated from a four-year college, or to be four years removed from high school.

So, since Hanna was only 20 and still in her sophomore year, she would need to wait at least 2 years before she can apply for WNBA. But we’re pretty sure, in light of all her achievements at Fresno State, she would have had an irresistible portfolio by then.

Hanna Cavinder never publicly confessed, but it seems that the TikTok star has dated an athlete like herself named Corvan Taylor.

On May 23, 2017, a sweet exchange between the two was seen over Hanna’s Twitter. She wrote, “my boyfriend is the best human”. To which, Corvan replied “hey I love you”, and Hanna added, “I love you too”.

Also, the duo was later spotted doing a couple’s challenge against Haley and her boyfriend Carson in April 2020. But Hanna’s boyfriend slowly disappeared from her socials then after. So, it could be that the two broke up. 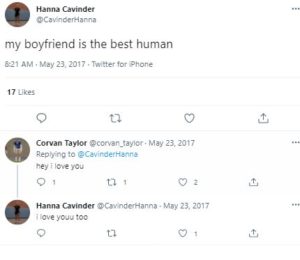 As of July 2021, Hanna appeared to be single while Haley was still dating Carson.

Little info on Hanna Cavinder’s boyfriend Corvan: He was an airforce football player who ranked second in the MW and 23rd nationally during the 2020 state army games. His family members included: parents David and Erin Taylor, and one older sibling.