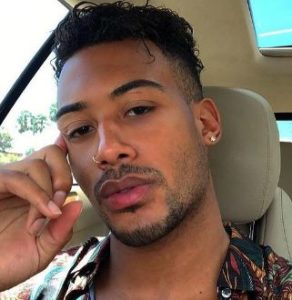 Javonny Vega worked as a real estate investor before he joined the cast of Love Island USA in 2021. He, along with 6 other boys, will be competing to impress a girl to couple with so that he could stay at the villa.

Delve into this Javonny Vega Wiki to learn more about him.

A total of 7 new male contestants entered the Villa of Love Island USA for season 3 on day one. Since not a single individual is second to none, they have to compete with each other for coupling with a girl in the villa. So, all power to the girls.

The show will have only 5 girls going into the season which means two of the boys will be left alone. But, the power center keeps on shifting so we might even witness additional girls in the show.

Let’s see if Javonny is capable to impress the girls in the villa.

But a different type of romantic interest for Javonny is developing in his home. On 1 July 2020, on the post where his mom showed him support for being on the reality show, she also commented that, “Mama Dukes says Kyra or Olivia.

So, they have already chosen for him on whom to impress this season.

Javonny Vega was in at least one relationship up to this point. But, he appears to be very private when it comes to going into details regarding dating life. He shared nothing related to his former girlfriend and his social media doesn’t cater anything in that regard.

The fact that Javonny entered a dating show denotes his singlehood. But, since he joined Love Island USA, he is open to having a relationship.

Javonny Vega was 26 years old when Love Island premiered its teaser and introduced him and other contestants to the world in June 2021. As he stated, he is a Leo by zodiac sign. However, we are yet to know his birthday.

Javonny Vega was born to Lisa Vega and her anonymous husband in his hometown of Orlando, Florida, the United States. Going by his mother’s Facebook, she is his biggest supporter. Ever since the news of his debut on the reality show, she promoted her son’s new career as a reality star.

Other than that, no information surfaced on his parents.

The Vega family members are of Hispanic ethnicity.

Javonny Vega stands tall at a height of 6 feet 3 inches (1.90 meters). As for his distinct features, he has multiple tattoos on different parts of his body. On his 21st birthday, he tattooed a huge lion on his chest being a Leo.

To start, Javonny Vega doesn’t seem to have created a TikTok account. And he is not that big on social media. Although, he could be discovered on Twitter, Facebook, and Instagram. @JavonnyVega, his Twitter garnered a total of 2 followers where he only tweeted 10 times in total.

Similarly, Javonny could also be discovered on Instagram @javonnyvega where he flaunted 8,334 followers as of July 2021. He only posted a total of 21 times.

Also, his Facebook profile earned 260 followers and he posts on the platform regularly.

Javonny Vega’s thriving business as a real estate investor and reality star earned him a reported total net worth of nearly $1 million.

Before we delve into the details regarding Javonny’s job, he attended Gateway High School in Florida. He graduated in 2014. According to his “work and education” section on Facebook, he immediately started building his career without attending college.

Javonny started his career by joining Kissimmee-based Stonegate Partners & Associates LLC in 2014. He worked for the company as an acquisition specialist for five years and quit his job in 2019. He also worked for Entrepreneur, according to his Facebook.

Then, Javonny pursued a career in real estate. In March of 2016, he became the owner of Montessori Homes. Furthermore, he has been working as an investor for Weacquire since early December of 2019.

As per his profile on Zillow, Javonny has over ten years of experience working as an investor. His specialties include Commercial R.E., Moving, Property Management, and Landlord. He mostly worked in Orange County, California, and places like Osceola County, Seminole County, and Richey in Florida.

Javonny also created a Facebook page where he documented his house flipping business. He also promoted the properties that he owned and their details.