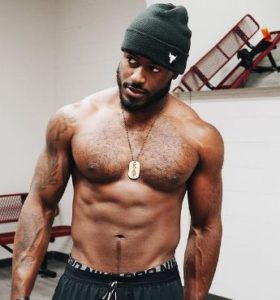 Before debuting in a reality show, Melvin “Cinco” Holland Jr. was a 4-star high school football athlete. But, later on, he changed his career path after not being able to make it as an NFL. He is introduced to viewers of Love Island USA as a fitness trainer.

Learn more about him with this Melvin “Cinco” Holland Jr. Wiki.

A total of 7 new male contestants entered the Villa of Love Island USA for season 3 on day one. Since not a single individual is second to none, they have to compete with each other for coupling with a girl in the villa. So, all power to the girls.

The show will have only 5 girls going into the season which means two of the boys will be left alone. But, the power center keeps on shifting so we might even witness additional girls in the show.

Let’s see if Melvin is capable to impress the girls in the villa.

Like his fellow casts from Love Island USA, Melvin “Cinco” Jr. also keeps his dating life away from public eyes. As an athlete, he must’ve stolen the hearts of many but we are yet to find out who stole his heart.

There are no Instagram posts that suggested a possible romance in his life. Not even a single post was related to his prospective girlfriend. Hence, we assume Melvin is very private when it comes to his dating life.

Melvin “Cinco” Holland Jr. was born on 3 December 1995. He turned 25 years old in December of 2020. Moreover, he owned Sagittarius as his zodiac sign.

Whenever Melvin left after a long practice in the late afternoon during his high school days, fried foods were not on the dinner menu. His father didn’t allow fried foods to enter his diet, and instead, he chose to bake chicken and fish for his son’s post-practice meal.

Melvin often woke up to a protein shake and fruit was always available in the household for his physical build. No information exists on his mother.

Based on the post, Melvin’s parents are divorced. Whereas, he has a brother named Marcus Davis from his mother’s side.

According to the player profile of Melvin “Cinco” Holland Jr. on the Tennessee Tech Golden Eagles’ page, he stands tall at a height of 6 feet 3 inches (1.90 meters). Whereas, he weighed 93 kilograms (206 lbs) which have changed since it’s been over 3 years.

Talking about social media reach, Melvin’s Instagram account @thetough_cinco garnered 12k followers until 3rd June 2021. He only posted 61 times on the platform. In the same way, he also created an account on TikTok under the name @thetough_cinco where he flaunted 362.9k followers. He gathered 5 million likes for his TikTok videos.

Melvin also created a Facebook account where he was friends with 2.6k people. The profile contains most of his personal details.

Talking about Melvin’s job, he joined Mutual of Omaha where he worked as an intern for five months. Furthermore, he joined Bowlero as a bartender in May of 2019. The current (2021) employment status there is yet to be revealed.

Besides that, Melvin and his best friend Christian Campbell founded Tough Fitness. Most of his TikTok posts are related to fitness and working out.

Melvin “Cinco” Holland Jr. attended Briar Woods High School. While there, he helped lead his team to a 13-2 record as a senior and a berth in the Virginia 5A championship game. He also notched five catches for 199 yards and three touchdowns in the championship game. He and his team won state titles during his freshman, sophomore, and junior seasons

As a high school senior, Melvin made 64 catches for 1,032 yards and 17 touchdowns. He was named a four-star recruit by ESPN, who also ranked him as the 12th player in Virginia and as the 48th wide receiver in his class. He also received three-star status from Rivals and Scout.

After graduating high school in 2014, he enrolled at the University of Minnesota- Twin Cities from where he earned his bachelor’s degree in business administration. He studied business, marketing, management, and related support services. He also participated in several games he played for the university’s football team.