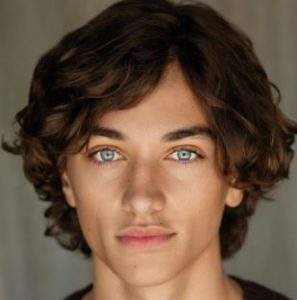 In Season 1 ep 4 of Walker, there appeared a new face “Trevor” — portrayed by Gavin Casalegno — who stumbles upon Stella at a barn. The two then go on to become close friends, share their pasts, follow each other over social media, and their friendship develops into something more.

So, who is this intriguing character? What is his real-life like? Stay with this Gavin Casalegno Wikipedia to learn all about him.

Gavin Casalegno was born on September 2, 1999, in Texas. That made him 21 years of age as he first appeared on Walker.

As per his birthday, Gavin is of the Virgo zodiac.

Gavin Casalegno inherits those genes from his parents, Bryan and Allyson Casalegno. His father, Bryan is a veteran who served in the US Navy. After retirement, he started working for the Ericsson company and worked there for over 8 years as of 2021. As for Gavin’s mother, she seemed to be a housewife then.

Talking about his out-of-this-world blue eyes, Gavin inherits them from his mother. He was the only Casalegno siblings who inherited them. His brother and sister both have brown eyes, like their father.

As of March 2021, no Gavin Casalegno wasn’t on TikTok. However, he had a fan account “@gavin.casalegno.edits” with 40 followers then.

But you can also follow him over Instagram and be of his 162K followers. He often posted videos that followed the TikTok trend over IG.

As an actor, Gavin garnered over 17 movies and TV shows credits then. Mentioning some of the popular are:

Talking about his career, Gavin was always interested in acting. He used to numerous acting workshops in Lewisville, Texas when he was small. Then, at the age of 7, he landed his first commercial for Papa John’s Pizza. Later, he appeared as a child in a 2010 episode of Lone Star and slowly started getting more recognition.

Apart from acting, Gavin was also interested in soccer during his school days.

No, Gavin Casalegno isn’t gay. He has a girlfriend named Larsen Thompson who is a dancer, model, and actress as well.

Gavin Casalegno started dating Larsen Thompson in 2017. However, “technically,” he said, they happened in 2016. Giving us a hint on their start of a relationship, he tagged Larsen over IG and wrote— “From fake prom to real, from a small Texas town to Paris, France! I love you to the moon and back!”

Larsen officially introduced Gavin as her boyfriend in July 2017 through Youtube. She and Gavin did a 5 question challenge there.

As of 2021, the two were happier than ever. Gavin took it to his IG with of picture of them, flaunting their blue eyes, captioned— “Blue Jean Baby”

Looks like their future kids won a genetic lottery.

Also, the lovebirds were always present at celebrations of each other, whenever possible — Larsen was there with Gavin to celebrate his 21 birthday, outing on a beautiful sunny evening. And Gavin was there at Larsen’s graduation ceremony. 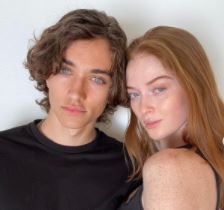 If you don’t know much about Gavin’s girlfriend, Larsen Thompson: She was one of the dancers in the viral fan video for the hit Beyoncé’s “Run the World (Girls).” Also, she has appeared on music videos of songs by Borns, Pink Katy Perry, Janet Jackson, Christina Aguilera, and Silento.