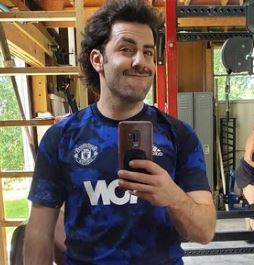 Work-out buddies and best friends, Tom Boyden and Jujimufu parted ways after 8 years of collaborating. Both saw the point of highs and lows in each other’s life and formed a fan base together. And fans remain unsettled after the news of the split.

So, get to know the story on why the duo decided to split over this Tom Boyden Wiki.

Why Did Tom Boyden And Jujimufu Split?

Tom Boyden and Jujimufu connected for the first time in 2012. Almost a year later in 2013, the duo shot their first video. But after 8 years together and creating a reputation as work-out buddies, they decided to split.

Fans first started formulating rumors when they noticed they weren’t producing any videos. And Jujimufu addressed it with responded clearly that he decided to part ways with Tom. He added,

“….I have not come to this decision hastily or lightly. Continued collaboration with Tom is no longer possible.”

Fans were sure of the statement made after the joint YouTube channel Jujimufu and Tom changed to Jujimufu. Whereas, Tom addressed the decision to split on Twitter and assured that he will be making videos again, and thanked his fans for the support.

A Twitter user suggested that the reason behind their separation had something to do with finances or legal issues. However, the speculation remains unconfirmed.

Tom Boyden was 31 years old as of March 2021. However, he never shared the precise date of his birth on his social media platforms. This restricted the information related to his birthday and zodiac sign.

Thomas R Boyden was born to his parents in his hometown of Madison, Wisconsin, the United States. However, details about Tom’s family members who are alive remain a mystery to many. And the list also included his parents and his possible siblings.

Talking about education, after completing high school, Tom attended Wageningen University and Research Center in 2013. Also, he pursued a bachelor’s degree at the University of Wisconsin-Madison in 2010. Tom graduated with a bachelor’s degree in Horticulture in 2014. While in college, he was part of Slow Food UW, F.H. King, and UW Gymnastics club.

In October of 2020, Tom Boyden was diagnosed with Crohn’s disease. He was at Trader Joe’s shopping while he dealt with stomach/BM complications all day. As he shared, he couldn’t go four steps without being out of breath and nearly passed out.

The store manager helped him out and he was taken to the ER immediately. There within 8 hours period, he lost about 20% of his blood. However, he stabilized overnight and also didn’t require transfusion.

Talking about his physical attributes, Tom Boyden stands tall at a height of 5 feet 11 inches (1.80 meters). Whereas, he weighed about 70 kilograms (155 lbs) after losing his previous weight of 88 kilograms (195 lbs).

Tom is an influencer and social media is the most important tool an influencer can use. His Instagram account earned a total of 106k followers. He posted 154 times as of this writing. Likewise, his Twitter account garnered 10.4k followers as of March 2021.

Furthermore, Tom is also on Facebook with 257 followers where he posts every once in a while. Also, he is on YouTube with 44.3k subscribers as of this writing.

While in university, Tom Boyden joined San Kor Tea in 2012. In the five months that he spent there, his more job was foraging, farm maintenance, harvesting, and syrup production. Before that, he worked for L’Etoile Restaurant & Graze in August 2011.

Later in 2013, Tom joined Project EAT in communications. He worked as a social media manager, content creator, and videographer for less than a year. From 2013 to 2014, Tom worked for Slow Food UW as communications director.

His main focus was to channel his energy and creativity on social media accounts, communications internally and externally. He sent newsletters, photographed several events, and figured out ways to reach students on the UW campus.

On the other hand, Tom also worked for F.H King Students for Sustainable Agriculture for a little over a year. He ran a program that picked up organic food waste from around downtown madison using an 8 feet long bike trailer.

Moreover, in May of 2014, Tom Boyden joined UW-Madison Horticulture Department as producer and editor. During that period he interviewed and filmed 15 farmers from his hometown. He applied the interview as the support for learning modules in the class.

Starting from January of 2016, Tom Boyden has been working for Breathe For Change as a videographer & creative consultant. The organization empowered teachers with mindfulness and yoga to change education.

Other than that, he volunteered as a guest teacher at the High School Of Telecommunications. Tom also worked as a prepper for the school lunch program REAP Food Group (Research, Education, Action, and Policy on Food).

Moreover, Tom Boyden is also on Pokerdb.thehendonmob.com. He ranked 22,578th US All-Time Money list, 219th in Wisconsin, and 150,048th for the popularity ranking.

Tom Boyden kept his personal life away from public attention. He never shared any information about his dating life (or wife, if he was married) as of March 2021. Besides, his social media held nothing that hinted about his romantic endavours.

All that his social media covered was his work and his love of working out. This even triggered some of his fans to assume that he might actually be gay. Not publicly sharing his girlfriend made people question his sexuality and his relationship status. However, Tom Boyden never bothered talking about his girlfriend or wife, if any.