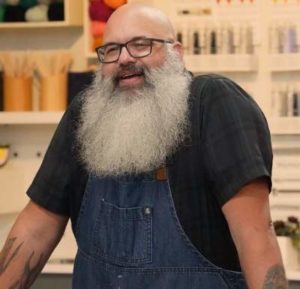 Meet Gary Herd, who is among the eight new contestants on the third season of NBC’s Making It that premiered on June 24th, 2021. He entered the series of handmade projects to become the “Master Maker” and win the $100,000 prize money.

Scroll through this Gary Herd wiki!

Gary Herd On Making It

Gary Herd seemed super excited about his Making It stint. A few days before his episodes aired, he took to Instagram to write he had a great time working with “the hilarious” Nick Offerman, “very sweet Amy Poehler.”

Plus, he spoke very highly of his seven other Maker friends: Jessie Lamworth, Becca Barnet, Adam Kingman, Blake McFarland, Maria Antoinette Loggins, Chelsea Andersson, and Kaviya Ravi. Gary thought them to be some of the most talented people he has ever met.

Talking about his inspirations, advice he wants to give other makers, and such, with Makeviews, he cited his biggest takeaway from Making It to be:

“My biggest take away from Making It were the people I have met and the life bonds I have created with all the talented makers on the show. Everyone on and off screen was such a pleasure to meet and an honor to work with.”

That been said, you may catch Gary putting his best skills on the line on the reality TV show. He believes he is not an expert but also someone who can figure just about anything out. He shared it’s the “If you fail….try again…and again…and again!” belief that keeps him going.

Gary Herd hails from his hometown of South Portland, a city in Cumberland County, Maine in the United States. He moved to Waldport, a coastal town in the central part of Oregon in 2013, and has been there ever since.

His mother is Rosemary Herd who turned 73 in 2021. And he has a brother named Thomas Herd. Thomas, as her his Facebook profile, went to South Portland High School and continued to call South Portland, Maine his home.

People with the names Phillip E Herd and David Herd are also Gary’s family members. Plus on his Facebook ‘family and relationships’, Gary mentioned his cousin Elizabeth Hall and mother-in-law Pat Lohr.

Until June 28, 2021, Gary Herd as ‘The Bearded Woodworker had 1,002 followers on his Instagram @the_bearded_wood_worker.

Meanwhile, as a YouTube creator, Gary entertained 8.74K subscribers on his channel @The Bearded Woodworker. On it, he mostly shared his demonstrations on how he creates woodworker projects as well as home improvements as they need to be done around his house.

Gary was also on his Facebook separately @the.bearded.woodworker and @Gary M. Herd. And lastly, he could also be found on his Twitter @@beardedbuildww.

Before Gary Herd participated in Making It to become the “Master Maker” and win the $100,000 prize money, he had more than an estimated $500K net worth.

Gary is an artist and mural painter by trade. In simpler words, he makes things from wood. So, his merchandise mostly includes small decor, and furniture, cutting boards, countertops, among others.

He has been painting murals for more than 13 years and is currently (2021) the owner at Kraken Studios of Murals, Art, and Signs. He has been working there since 2017.

Previously, i.e. from Jan. 2007 to Dec. 2016, he served as the owner at Cry of the Wolf creative design. Both the companies are based in Portland, Oregon.

On the day, May 17, 2007, Gary Herd tied the knots with his best friend Sara Herd and they have been married ever since. 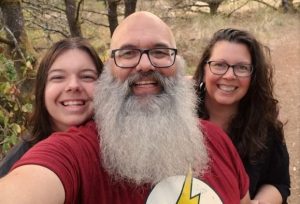 His wife Sara, who is quite a mystery to the outside world, worked at Lincoln County Oregon Public Health, at the time of this writing.

Together, Gary and Sara have a 13-year-old son, Alexander. At times, Alexander featured on his parents’ social media. Clearly, he is lucky to have such loving and caring parents. The early-teener is on Facebook @Alex Herd and his bio on the platform read “I did this for theatre.”

Meanwhile, Gary is the kind of father who is happy to help his son on his science project.

When Gary is not woodworking in his shop, he is spending time with his family, or if not he is singing and acting in local musical theater.