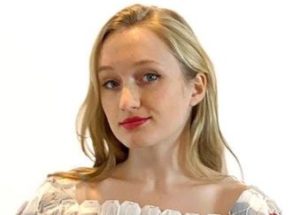 In 2021, NBC’s Making It returned with eight new faces who competed to win the title “Master Maker” and a whopping $100,000. Among them, Jessie Lamworth has caught our eye with her unique skill to creates art with foods.

So, who is she? Stay with this Jessie Lamworth Wiki to learn all about her.

Jessie Lamworth On Making It

The crafting competition, Making It season 3 was one of the most awaited shows in 2021 for the viewers who loved arts and designing stuff. If you are new to the show, its hosts Amy Poehler and Nick Offerman handed out tasks to each maker and eliminated them as the weeks passed by.

Any progress on Jessie’s participation will soon be updated.

Jessie Lamworth was reportedly born in 1996. So, that would make her 24 years of age as she first appeared on Making It in 2021.

This potential master maker celebrates her birthday on November 3 and is of the Scorpio zodiac.

Jessie Lamworth has two moms. Yes, you heard it right. Her parents, Marla and Joyce, were a very important part of Jessie’s life and the most supportive parents anyone could even ask for. Moreover, although Joyce is a doctor and Marla is a lawyer, they never pressured Jessie to pursue a career just for society’s approval.

Growing up in Baltimore County, Maryland, Jessie recalled all the fun moments she had with her moms raising cows, chickens, and pigs at their farm. Maybe this was also the reason, Jessie moved back to their farm in Maryland with her parents.

Information about her siblings wasn’t available.

Jessie Lamworth garnered a net worth of under $200 thousand by 2021.

Ever since a kid, Jessie was free to explore things and find her calling; thanks to her supportive parents. However, her school started giving less priority to artistry and more priority to test scores as she got older. Thus, Jessie went on to join Haverford College with a major in biomedical engineering but switched to architecture and urban planning later.

Then, as she graduated in 2018, Jessie moved to NYC and took on the job as a brand consultant at VIVALDI in March that year. Tired of working under others and finding the city to be “overwhelming”, Jessie then left the company 18 months later and became her own boss.

After then, Jessie worked as a freelancer until early 2021 when he was hired by her old firm as a contractor to work on branding projects for a financial services company and an alcoholic beverage manufacturer.

Here are some of the companies Jessie was associated with in the past — 409 + Co., Hello Products LLC, Bryan Mawr College (as teaching assistant), and MKThink.

For high school, Jessie attended The Park School of Baltimore from 2010 to 2014.

As for her specialties, Jessie’s crafts are inspired by “American Scene Painting, Surrealism, Regionalism, and utopian planning.” She shared that her process involved both “structured and unstructured experimentation” and one wisdom she gathered over the years was that “approaching problems in new, uncharted ways yields more spectacular results.”

If you are interested go check her works at “jessielamworth.com.”

Trivia: One tool that Jessie cannot live without was her “hand”. She added, “Dexterity and hand-eye coordination cultivated through years of sculpting, tinkering, and making is something invaluable to me.”

Her TikTok then flaunted 22.5K followers.

You might have already guessed, but yes, most of her posts featured her artistry skills — food art, animations, and sculptures.

Some of ours and her favorites were: Chicken made with eggshells, The words “lettuce move!” written with lettuce, and a Lion’s head built with feathers, buttons, fabric scraps, and other findings that her late grandmother Rosemary gave her.

The creative artist, Jessie Lamworth’s dating life remains a mystery to us. Be it a choice or lack of fan’s inquisitiveness, Jessie never talked about her boyfriend until mid-2021.

Also, judging from her social’s post, there was no hint about her boyfriend either. Except for the time Jessie went to Italy in May 2019 with her certain special person. We guess that it could have been her boyfriend.