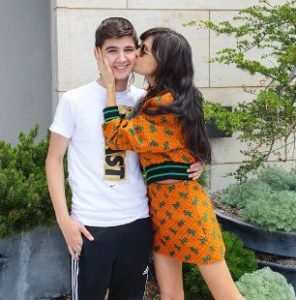 Aron Hendler is no longer a stranger, but a reality star who appeared on Netflix’s My Unorthodox Life with his parents and siblings. He is the youngest and the only one who hasn’t let go off of his religious upbringing.

Scroll down this Aron Hendler Wiki to know more about life details, information on his parents and siblings, and his school.

Aron Hendler On My Unorthodox Life

Aron Hendler starred in My Unorthodox Life as one of the four kids of Julia Haart and her ex-husband Yosef Hendler. Not only that, him being the youngest, and more than half the age of the eldest kid Shlomo, Aron is adored by all of the family members. He is close with Batsheva in particular and spends time together.

At times, Aron believed that social media, television, and even talking to girls were not completely okay. But, the fact that he amended most of his beliefs, suggested that he has gotten reasonable and logical towards the way of his lifestyle, not only entirely depending on tradition.

Aron is very close to his mom, the most radical member of his family. Even though she deviated from the traditional lifestyle after her divorce, he was grateful for everything that she did for him and his siblings.

In the show, Aron gets a reasonable screen time as his siblings. He still straddles worlds, dividing his time between his father’s house in Monsey and his mother’s penthouse in New York.

As seen on the Netflix series, Aron and his siblings negotiate their relationship with religion and their mother’s decision to leave the community they were raised in. As his mother explained: “It is very emotional. Think about it, you are literally ripping yourself away from everyone and everything you know, and moving 400 years into the future.”

His mother reassured him that she wasn’t against the religion in the show, it was her fight with fundamentalism. Now, Julia is ready to tell her story, and Aron and his siblings are happy to be a big part of it.

Aron Hendler turned 15 years old in June of 2021. On 22 June, his mother Julia Haart took to her Instagram to wish him a happy birthday. She called Aron her ‘Ben Zekunim’— translation “son of his old age” and her peace-maker.

Aron Hendler was born to his biological parents Yosef Hendler and Julia Haart (born Talia Leibov) in Monsey, New York, United States. His parents got married when his mother was only 19 but separated after 23 years together. After getting divorced, her mom married Silvio Scaglia, an Italian business tycoon. Whereas, Yosef Hendler got engaged to Aliza Schulhof with her in March of 2021.

Julia, his mom, is Group CEO of Elite World Group, a modeling agency that she co-owns with Silvio. She celebrated her birthday on 11 April 2021. She founded her own shoe company and briefly helmed a lingerie brand La Peral.

Whereas, no information surfaced on his dad.

Miriam is a co-founder of Norma, Queer Chart, co-teacher in CS11, CoLab Fellow of IDEO, and co-founder of Eazitt. Then comes Shlomo, who claims to be a virgin. He attended the University of Cambridge where he completed an international summer program in Sociology and Genetics.

Shlomo graduated from Columbia University in the City of New York with a BA degree in Political Science and Government.

Batsheva Haart is a social media influencer and lifestyle blogger who has been running Sunnies & Sangria since 2017. He married Binyamin Weinstein on 17 October 2012.

When it comes to looks, Aron Hendler also takes on his mother’s side. He is a handsome guy standing tall to the height of 5 feet 7.5 inches (1.71 meters). He also weighed about 58 kilograms (127 lbs).

All of this suggested his interest in interacting with people in the real world rather than the digital world.

Aron Hendler attended an Orthodox School in Monsey, New York where he still resides. He attends a co-ed high school. The fact that he is still young (as of 2021), suggested that his parents shared joint custody of him. While most of his family members opted for the modern worldview, Aaron, on the other hand, maintained ultra-Orthodox Jewish rules and regulations.

His orthodox belief disallowed him to interact with the girls. According to her mother’s posts, all of that has changed. Aron had high school female friends over for the birthday party organized by his friends, and now having female friends doesn’t seem so wrong.