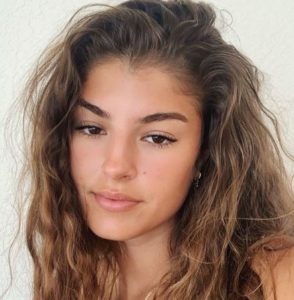 Darianka Sanchez is a model who first gained the limelight as she was discovered by the NEXT MODEL management – Worldwide. Also, Darianka’s popularity was aided by Evolve Model management in 2020.

Apart from being a model, Darianka also enjoyed spending her time on TikTok. Dancing and lipsyncing, she mostly seemed to share collaborative videos with stars like Nick Austin, Kio Cyr, and Olivia Ponton.

Divulge into Darianka Sanchez’s personal life through this wiki styled article. Moreover, get to know her family, ethnicity, and boyfriend as the article continues.

On June 8, Darianka was officially all set to join the Hype House. Sharing the excitement, Darianka along with her management took the news to Instagram which was followed by abounding support from fellow TikTokers.

Unfortunately, at the same time, Darianka met with a flurry of bullying allegations — including against popular TikToker, Kenzie Ziegler. The incident linked back to a 2015 iCloud leak of Ziegler and her family, which fans believed to have some involvement with Darianka.

Other allegations against Darianka included —  she hacked Dance Moms star Kendall Vertes‘ Instagram, she used to run an “exposing page” on Instagram where she would leak info about big influencers, and She liked some hate comments on Charli D’Amelio.

Later, the Hype House put an end to any affiliation with Darianka. They commented on one of their posts “We wish her (Darianka) the best but she is not a part of Hype House.”

However, it was unclear if Darianka was ever a part of the Hype House.

Darianka Sanchez was born on Jan 22, 2002. She was 18 years of age when the “black lives matter” protest started in 2020. Supporting the moment, Darianka followed the #blackouttuesday trend over her Instagram.

As for her hometown, Darianka was born and raised in Heredia, Costa Rica. She went to Florida high school for education and ran on the school’s track and field team. Also, Darianka was elected homecoming queen and was in a cheerleading squad.

Moreover, her ambidextrous writing skill surprised everyone in her school.

Born to Costa Rican parents, Darianka Sanchez grew in a family of four. She has a younger sister named Isabella who moved to Orlando, Florida at a young age.

On a side note – Darianka was very fond of snakes.

To mention her distinct features. Darianka has a beauty spot near the right side of her nose. Also, her slightly-raised eyebrows look appealing on her heart-shaped face.

You may like – Avani Gregg Wiki, Boyfriend, Height, Net Worth, Ethnicity

Also, her @whotfisdarianka new TikTok account had over 642.8K followers. She mentioned, her old account would soon be back.

Darianka’s started her modeling while she was still in high-school. Getting scouted by the NEXT MODEL management – Worldwide was her biggest achievement as of 2020. As for her endorsements, Darianka was the face of some minor organizations but had yet to land a big deal.

In early 2020, Darianka Sanchez’s net worth was estimated to be around $200 thousand.

Coming to her dating life, Darianka Sanchez didn’t share much about her boyfriend. However, there was a rumor about Kio Cyr being Darianka’s boyfriend. As of early 2020, Darianka had yet to confess about her dating history.

Maybe with the controversies, she was facing, Darianka wanted to keep her boyfriend away from the media for a while.