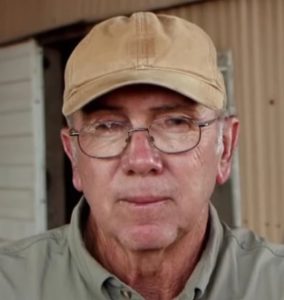 Daniel Edgar, the subject of this article, came into the limelight after viewers loved his gator hunting skills in History‘s American reality series Swamp People. Together with other casts, Daniel uses his fishing and gator-hunting kills in the swamps of the Atchafalaya River Basin.

It would not be an overstatement to say that Daniel is one of the most dedicated and successful gator hunters in the world. However, there’s one area where he has not been much successful — relationships with his wives.

In the following Daniel Edgar wiki, we will talk about that and also briefly touch upon his age, net worth, and family information.

As of May 2021, Daniel Edgar was married twice. His first wife, Juanita Thomas Broussard, was a black woman. Daniel had two sons, Joey and Dwaine, with Juanita.

Daniel explained to International Magazine Kreol that he and his first wife, Juanita divorced because of the lack of time they got to spend with each other. He told, “I worked seven graveyards and I shrimped during the day. The only sleep I got was a little cat-nap at work.”

Parting ways with Daniel, Daniel’s first wife got married to a man named Russell Broussard. Unfortunately, Juanita passed away on March 17, 2018. Russell and Juanita had lived together for 37 years as of March 2018.

As a third-generation fisherman, Daniel learned about fishing through his father, Rufus Edgar, with whom he used to spend countless hours on the bayou.

Daniel poured his heart and soul into fishing while he was still learning through his dad–and even continues to demonstrate that in the show Swamp People.

And in a way, the busy schedule of his work is something that ruined Daniel’s personal life.

Parting ways with Juanita, Daniel Edgar married his second wife Mandy, who hails from a Cajun family in the Lafayette area. They have a daughter, Danielle, out of their relationship.

Daniel again parted ways with Mandy for similar reasons for which he had broken up with his first wife.

Daniel said they had too much work to do and had almost no time to spend with each other. Talking to International Magazine Kreol, Daniel told, “She worked very hard, but it got to the point where she just couldn’t do it anymore.”

As of May 2021, Daniel had no romantic partner and appeared to be single. Perhaps the Swamp People star will remain to be single until he is sure that he can contribute enough time to keep the relationship alive.

In hindsight, there might be several things Daniel could have done to save his relationships but one thing that we have to accept is the fact that he has done everything for his kids.

Daniel has two sons (mixed race) and one daughter. Joey and Dwaine have both played their roles in keeping their family business afloat. Both of them are married and have a family of their own. Joey is married to Jennifer whereas Dwaine is married to Lenor. Daniel’s grandson Dorien is also into the family business. All three of them have appeared in Swamp People.

Daniel’s daughter, Danielle, however, has yet to make an appearance on Swamp People.

As of 2021, Daniel Edgar’s net worth was $1 million as per the Cinemaholic.

Daniel has made a huge fortune over the years. He earns money from Swamp People as well as his two businesses.

Reportedly, Daniel earns around $10 thousand per episode on Swamp People.

His Age: How Old Is The Swamp People Star?

Daniel Edgar, known as the Creole Patriarch, was born in his hometown near Jeanerette, Louisiana to his parent: Rufus and Bertha Edgar. Daniel’s father was a carpenter and a fisherman. As per some reports, Daniel’s parents were illiterate.

Daniel grew up with five siblings. Their names are Bertha Ann, Albert, Cathelia, Rose, and Janice.