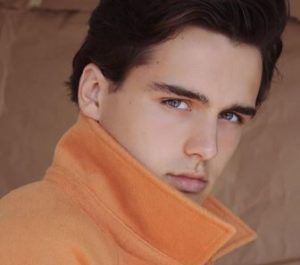 Charlie Gillespie plays guitarist and is one in real life too. Read the article below to know everything about Charlie.

According to our extensive research, Charlie Gillespie was born on 16 September 1999 in Canada. Thus, by the time this article was written, Charlie was 20 years of age.

Moreover, his September 16 birthday suggests that his zodiac is Virgo.

Charlie Gillespie was born to parents of white Caucasian ethnicity and Canadian nationality but their names were not known.

Charlie’s musical disposition is largely due to his growing up in an artistic household. Among his three siblings (two brothers and one sister), both of his brothers, Patrick Gillespie and Michael Gillespie, are musicians. Similarly, his sister, Meghan Gillespie, is a dancer.

Apart from his siblings, Charlie also had a cousin by the name of Maddie Leblanc, who he was very close with.

Talking about his education, there was no information regarding where he completed high school. However, in December 2015, Charlie posted on his Instagram that he was soon going to complete his high school graduation.

At twenty years of age, Charlie Gillespie had a height of 5 ft 10 inches. While he was already quite tall, there was still room for a little more growth. Meanwhile, he weighed 78 kgs.

Charlie had a handsome face, dark black hair that came down to his shoulders, and piercing green eyes. He also had a ripped body, and he took full use of it when he posed shirtless for an Alex Jackson photoshoot.

Charlie was still new to the show business, only a few TV shows to his name. Thus, his social media presence was also at its infancy, that is it will grow rapidly in the coming days.

Yet, for a newcomer, his social media presence was still incredible. On his Instagram, he was the following of 12.4k with 327 posts [Aug 2020].

Coming to Charlie’s professional career, we have already said that he is an actor as well as a musician. His acting credits include The CW series Charmed, an American supernatural fantasy series, in which he played in a minor role.

He also acted in Family Channel‘s teen drama Degrassi: Next Class, in which he again appeared in a very minor role. His first major role was in Netflix‘s Julie and the Phantoms, which we mentioned already.

In Julie and the Phantoms, Charlie played the role of Luke, an already guitarist and singer, who comes back as a phantom and forms a band with titular Julie. Apart from Luke, there are other musician phantoms: bassist Reggie (played by Jeremy Shada) and drummer Alex (played by Owen Patrick Joyner). The three phantoms join hands with living Julie (played by Madison Reyes) to make a band.

The four main cast members of the show were friends in real life also. 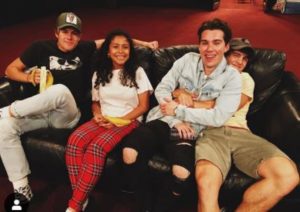 Charlie Gillespie and the entire cast of Julie and the Phantoms are friends in real life too (circa 2020; PC: Charlie’s IG)

Charlie Gillespie’s dating life is where the web was almost blank. His Instagram was filled with posts about his friends, siblings, and cousins, places he had visited but was almost nil on girlfriends.

The only thing related to love, dating, or married life was the congratulatory post to his friend and co-star Jeremy Shada, who got married on 9 March 2020.

There were some rumors of him being gay, but again the only actual relation to homosexuality he had was the fact that the character of Alex, of Julie and the Phantoms, was gay.