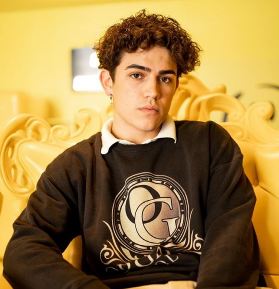 TikTok star Anthony Barajas was shot in a California theater and was in critical condition. Ever since the news, his fans are eager to know what went down, is he still alive, and who was the killer?

Learn all about him with this Anthony Barajas Wiki.

According to the last update on 28th July 2021, Anthony Barajas was alive.

During a shooting in Corona Theater, Anthony Barajas and his friend Rylee Goodrich were shot by an anonymous gunman. They were watching The Forever Purge at the So-Cal movie theater. His lady friend was pronounced dead immediately. But police rushed him to the hospital and he was on life support.

According to Corona Police Department, “the 911 call was placed when the employee or employees walked inside the theater to conduct their clean-up and found him bleeding on the floor.”

Detectives were attempting to find the evidence but there was no gun. They were trying to identify the shooter but they had nothing in their hands. Plus, none of the people heard any gun sound when the show was on.

Along with that, the motive for the murder and attempted murder was yet to be revealed.

As of the end of July 2021, Anthony Barajas was 19 years old. He celebrates his birthday every year on 9 August. Per that piece of information, Anthony secured Leo as his zodiac sign.

Anthony Barajas was born to his unnamed father and his mother Catherine Soto Barajas in California, United States. His parents married in August of 1997. So, they have been together for over 20 years. Their anniversary and Anthony’s birthday fall on the same day.

According to social media, her mother Catherine hailed from Corona, California. She is an advocate for the fight against cancer and donates on several causes related to it. She is on Facebook with 322 friends in total. Similarly, she is also on Instagram but kept her account private with 207 followers and 246 posts.

Social media star Anthony Barajas is the only brother to his two sisters; Julia Barajas and Jayde Barajas. Julia is an athlete who goes by (@jewlsbarajas) on Instagram. She garnered 1,221 followers. Jayde Barajas kept her account private which contained 1,539 followers and 5 posts.

Anthony Barajas had girls hooked on him on TikTok and Omegle. Besides his appealing looks, he stood tall at the height of 5 feet 9 inches (1.75 meters). Furthermore, he weighed about 78 kilograms (171 lbs) because of his muscular shape.

On TikTok, Anthony went by the name @itsanthonymichael. He had earned an extremely impressive 928.6k followers. Moreover, he followed 368 people and garnered 34.3 million likes for his videos. On Instagram, he went by @itsanthonymichael where he had 41.9k followers. He had only 46 posts in total.

The California-based TikTok star Anthony Barajas should have a net worth under $100 thousand.

Anthony Barajas attended Mater Dei High School. During his high school years, he was a renowned soccer player who played as a mid-fielder putting on No.9 Jersey. In his junior years, he played 20 games in total in 2017.-2018. He scored 9 goals in total in that season.

In March of 2019, Anthony also received the title of Mater Dei’s Monarch of the Month for March. The recognition was awarded to a senior who exemplified Monarch’s character and spirit. He graduated high school in 2019.

Besides football, Anthony earned recognition as a social media star, TikTok in particular. He posted his first TikTok on 27  February 2019. The first video of him going viral was posted on 27 February 2019 of him singing a song.

Most of the earliest videos that Anthony made were of him singing songs. The first video that hit a million views was posted on 25 April 2019 of him singing Stand By Me. The second video that went viral was his cover of Bruises by Lewis Capaldi.

Anthony has posted over 900 videos on the platform.

Besides TikTok videos, Anthony also promoted merch from the brand Unsettled which was founded in 2018. He also supported the cause that his mother was involved in to fight cancer.

However, after the Corona Theater shooting, his sister Julia Barajas started a Go Fund Me. As he was on life support, the family needed financial help. Of the target set of $25,000, they were able to raise $16,859 at the time of this writing.

The first girl Anthony Barajas introduced as his girlfriend was Molly Shiveley. She introduced her on Instagram in July of 2019. She was featured on a sound where he announced her as his soulmate. They last appeared together in August of 2019.

Furthermore, they became Omegle “husband” and “wife.” Anthony posted a whole series on his TikTok. Hadleigh starred starring on the post recurringly. But, later it turned out it was all just a setup for the TikTik series which they created together, and Hadleigh wasn’t his serious girlfriend.

After that Anthony Barajas introduced a new girl around March of 2021 named Autumn. They appeared on each other’s posts until May of 2021. He even introduced her to Hadleigh.

Autumn and Anthony posted a TikTok titled we broke up in April of 2021. But, they were last seen together on TikTok in May of 2021.

More From Us: Cathy Ang Wikipedia: Boyfriend, Parents, Net Worth