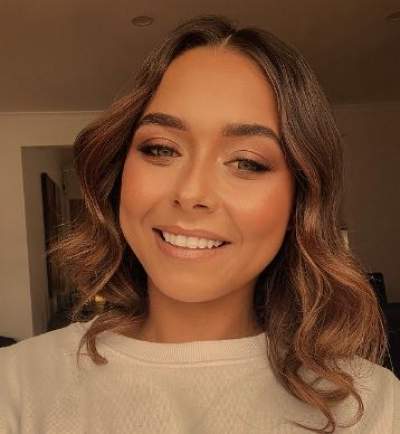 So, The Bachelorette Australia Season 7 is on its way!

On May 19, 2021, Australia’s Channel 10 announced its first-ever openly bisexual lead to be Brooke Blurton.

Brook is ready to date male and female contestants this season, and more than anything else she wants to find out if Australia is as ready for a mixed-gender cast on its favorite reality show.

Brooke: “I am not too sure if Australia is ready for it—I certainly am. If it makes people feel uncomfortable in any way, I really challenge them to think about why it does.”

Now, never miss this Brooke Blurton wiki below if you care to know more about her.

Brooke Blurton’s season of The Bachelorette is currently casting participants and a premiere date has yet to be declared.

Anyway, this marks the first time globally that the Bachelor Nation will have a mixed-gender lead.

Not to miss, Brooke was a contestant during Nick Cummins’ season on the Australian version of The Bachelor in 2018. She also appeared on its Bachelor in Paradise in 2019.

Born as a Capricon, Brooke Blurton celebrated her birthday every year on the 1st of January. Also, she reached the age of 26 in 2021.

Brooke Blurton Parents, Is She Aboriginal?

Brooke grew up in a small country town of Carnarvon in Western Australia. Surely, she is an aborigine Noongar-Yamatji. She was born to an Aboriginal-Malaysian mother and an English father. Her grandmother “nan” was Noongar. She is really proud of her cultural identity.

For someone who aspires to a fairy tale romance, her life growing up was anything but a fairy tale. She survived a traumatic childhood “marred by sexual assault, drug-fuelled violence, and her mother’s suicide”, as Daily Mail Online puts it.

She spent her childhood in Carnarvon until she was about 11 when her mum committed suicide. A mother later and he lost her nan too.

Brooke eventually went to live with her father who remarried and “wasn’t that supportive.”

Brooke: “Growing up was pretty complicated. [There was] a lot of drug and alcohol violence in my childhood and I had an older sister who suffered from schizophrenia.”

All along her brother Troy went through depression, drugs, and drinking problems.

Despite the horrors of her childhood that included her being sexually assaulted at her mom’s funeral, Brooke found the strength to become a role model for her eight siblings (two sisters and six brothers).

Brooke Blurton stands to a height that is 5’3” and weight (lately listed as) under 50 kg.

Brooke Blurton’s official account on Instagram held 221k followers (before 20th May 2021). Besides, the Perth, Western Australia inhabitant entertained an increasing 12.7K followers on TikTok. She could also be spotted on Facebook and Twitter.

Also a one-time speaker on mental health on TED Talks, Brooke Blurton had an estimated above $450K net worth (before 2021).

Her LinkedIn reads: she has been using social media, TV Networks, Campaigns, platforms as a way to connect to Young People and wider Australia to educate them on important issues such as Mental Health, Suicide Prevention, Aboriginal Representation, Cultural Inclusivity, and LGBTIQ+ representation.

She is a social media influencer for The Society Agency, ambassador for R U OK? and F45 Training, a certified personal trainer at the Australian Institute of Personal Trainers, and the aboriginal mental health first aid instructor for Mental Health First Aid Australia.

Her income source ranged from all kinds of above-mentioned jobs, endorsements with several brands. Now, of course, she awaits one too many handsome paycheques for her TV role as the bachelorette.

Note: indeed.com reported, the average salary for a youth worker in Australia is $36.55 per hour.

Of course, Brooke’s must be more or less than the calculated, depending on her many factors.

Before you see both men and women competing for her affections on the highly anticipated season, here’s a brief look at her past relationships especially with G Flip and Abbie Chatfield.

During the start of 2021, Brooke found herself rumored with 26-year-old musician G Flip (real name Georgia Flipo) after they attended the Australian Open in Melbourne together. Brooke recently clarified the speculations with news.com.au saying “G Flip and I are absolutely friends”.

Then about Abbie Chatfield, the Australian star who won her season of I’m A Celebrity in 2021, Brooke again explained,

“We are the most platonic friends now. She fully denied the fact that I actually wanted to take her on a date and danced around the question [on the podcast].”

Brooke, before appearing on Abbie’s podcast, It’s A Lot had asked Abbie out on a date. This was in fact the cause of all rumors between the two. To this, Brooke lately and finally hinted nothing happened from the interaction.

Following Channel 10’s announcement, many Australian stars had congratulated Brooke and Abbie was one of them.

The post was accompanied by a photo of Brooke and herself. Gushing over Brooke she kept writing,

“Brooke is one of the best people I’ve ever met. She’s intelligent, down to earth, hilarious and knows herself so bloody well. I can’t wait for this to air!”