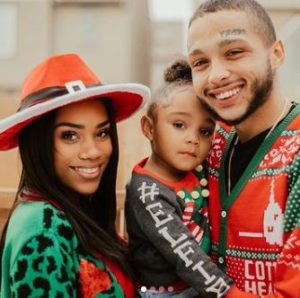 Bariki Smith is best known as the baby father of Teen Mom 2 star Ashley Jones. Together they share a kid. But, on 16 May 2021, Bariki Smith was arrested in California allegedly resulting in tension between the two.

So, people wanted to know who was Bariki Smith? What job he had to support his girlfriend and his daughter? And updates about his family. Scroll down this Bariki Smith wiki to learn more about them.

According to Famous Birthdays, Bariki Smith was born on 1 March. He turned 24 years old while celebrating his birthday in 2021. Furthermore, Bariki secured Pisces as his zodiac sign.

Bariki Smith was born to his anonymous ad and mom Shenandoah Williams in San Francisco, California, the United States. Almost no information surfaced regarding the father of Bariki Smith. Whereas, his mother is a regular cast of TLC’s Teenage Mom: Young and Pregnant.

Shenandoah, the mom of Bariki, claimed that she lived quite a life. She even planned to write a memoir about her life after quitting the show. She planned on breaking stories into the five-part; her childhood abuse, teenage years living in group homes & foster care and getting pregnant, adulthood filled with domestic violence, adult years raising her own children and dozens of additional foster kids, and her life living with her husband and youngest daughter.

Shenandoah has publicly shared some of her backstories from her life in the hood where gang violence was an everyday thing to the joyful moment of her kids accomplishing great things in their life. She talked about raising five kids along with other foster kids.

Once Shenandoah found herself clashing horns. They disagreed with each other on several issues. But, when a fake social media profile of Shenandoah commented wishing that Pastor Tea, Bariki’s mother-in-law, get raped tension grew between the two.

But Shenandoah made it clear, she herself was a rape survivor. The rape got her pregnant with her twins. She aborted them at six months. Shen snapped and replied—”So b*tch, for you to say that I would EVER mock ANY WOMAN to be raped — you f**king fat dirty b*tch!”

Shenandoah raised 47 kids in her life and already had 4 kids when she was pregnant with the twins. Aborting the twins was the best decision for her at the time.

After quitting the show, Shenandoah moved to Ohio with his daughter Yaz. One of many reasons Yaz quit the show was because she faced racial discrimination. She complained to MTV but her grievance wasn’t addressed.

While in Ohio, Shenandoah got the job of a driver working for Lyft and shared her plans about joining Uber. She also applied for a legal gun, in case, she finds herself in life-threatening situations.

Bariki Smith grew up with his brother Troy Seales and his sister Yasmine. Very little is known about Bariki’s sister Yaz. The only thing that we know about her is she now lives there with her mother Shenandoah and her family.

Coming to Bariki’s brother Troy, he was convicted in April of 2018 for the murder of then-22 years old Deandre Adams on 25 August on Olive Street in Oakland. As reported by Troy and his accomplice, Dupree Riley opened fire on Deandre’s car.

In November of 2018, Bariki’s brother was charged with 50 years to life in prison. His 50 years sentence included; 25 years for first-degree murder and another 25 for the use of a firearm during the commission of a serious felony.

In early March 2021, A California appeals court upheld the murder conviction of Troy Seales. A protection witness had brought his ex-girlfriend in the court where she testified Adams was killed because he’d crashed Seales’ car.

According to the prison records, Troy Seales was serving at New Folsom Prison and was set eligible for parole in 2047.

Bariki Smith stands tall at a height of 5 feet 7 inches (1.70 meters). He weighed about 51 kilograms (112 lbs). Other distinct features of Bariki include the multiple tattoos that he was on his body including one above his eyebrows and his chest.

Coming to social media reach, there exists two different Twitter account in his name. One titled Lone Soldier earned 283 followers. Whereas, his other verified Twitter account earned 26.2k followers. On the platform, he tweeted 4128 times.

Bariki was also on Facebook where he last posted on the platform in April of 2019. Likewise, he was also on Instagram where 199k people followed him where he posted 73 times as of May 2021.

From reality TV to music, Bariki Smith tried his hands on everything to build himself a feasible career. At one time, he moved to London to study but returned after some time. But, ever since Ashley, his girlfriend joined Teen Mom 2, his social media following thrived.

His impressive social media following attracted endorsement deals from several brands on his social media. But, a commenter revealed in Reddit that Barki Smith doesn’t have a decent job and had no willingness to further support the family.

Talking about his music career, Barki released a few songs including Death Threats, You Hear Me?, How You Steppin, London To Cali, and Wicked.

As for Bariki Smith’s net worth, his fortune had a total valuation of under $100 thousand.

Bariki Smith and Ashley Jones were teen parents to their daughter Holly Lockette-Smith. They were on-and-off ever since they started dating each other. The couple previously starred in Young and Pregnant. When they starred in the first season of the show, Ashley and Bariki were engaged.

However, the engagement fell apart in May of 2019. In Ep. 19 of season 10, of the show, the teen parents were captured celebrating their anniversary. Before getting on the knees, Bariki expressed his feelings and appreciation towards her while they were vacating in Pismo Beach, California.

Bariki got on his knees and popped the question—”I would like to ask you again, will you marry me?” But, the rumors flew the Ashley and Bariki has broken up once again. Based on a report of The Ashley’s Reality Roundup, Ashley stopped following her fiance on socials which might’ve caused by the arrest of Barki on 16 May 2021.

Bariki was booked in Merced County Jail in California for willful discharge of a firearm in a negligent manner. But, nobody got hurt, thank goodness. A bond of $25,000 was set for his bail. He was charged with a felony offense that could lead to three years in jail. Bariki was also arrested back in 2015 for trespassing, falsifying information to the police, and possession of meth.