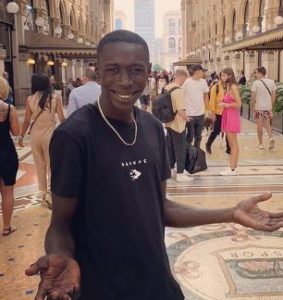 Khaby Lame gained recognition on TikTok as a guy who simplified complicated lifehacks videos on the platform without uttering single words. Not only he went viral, but Khaby was also breaking records earning himself the title King of TikTok of Italy.

Delve into this Khaby Lame Wiki to learn more about the Italian TikTok sensation.

On 9 March every year, Khaby Lame celebrates his birthday. This made him a Pisces by zodiac sign. Furthermore, Khaby turned 22 years old while celebrating his birthday in March of 2021.

Khaby Lame was born to his Senegalese parents in Dakar, Senegal. Almost no information surfaced on his family as of this writing. But, when his parents immigrated to Italy, he was only 1 year old.

The Lame family settled in Chivasso, in the province of Turin. Khaby and his family spent their lives in public housing via Togliatti. In fact, Khaby accepted that he owed everything to the housing area. While most people were worried to reveal that they lived in the housing, he would proudly share about his upbringing in that area.

Everything Khaby learned, he learned in the housing, played football, and cultivated bonds. Having spent over 20 years in Italy, Khaby Lame is a proud Italian national. Talking about his sibling, he has at least one brother who goes by the name @young_dudu.

Khaby Lame stands tall at a height of 5 feet 10 inches (1.77 meters). His African heritage blessed him with a dark skin tone. Moreover, his wider smile, dead and unimpressed eyes, and revealing gums are what viewers notice are his distinct features.

Furthermore, Khaby weighed almost 74 kilograms (163 lbs) as of this writing.

All the fame and recognition Khaby Lame earned were because of social media platforms. As of May 2021, he was on Instagram with 12.7 million followers. In the same way, he was also on Twitter with 231.6k followers. Also, he tweeted 203 times on his Twitter.

Furthermore, Khaby was also on Facebook where she shared very little information on himself. His IG profile also gave a link to his YouTube channel, however, not a single activity was seen on the platform.

As of this writing on 20 May 2021, Khaby Lame earned 51.9 million TikTok followers and 730.7 million likes for his videos. With sponsored posts, TikTok Creator Funds, and endorsement deals, Khaby Lame’s earning is thriving on its way to earn him $500 thousand.

Coming to Italy when he was only 1, Khaby Lame earned his academic qualifications in Italy. Maintaining privacy about himself, Khaby didn’t entertain sharing information about himself. However, his Facebook had shared that he attended Scuola Media Chivasso Demetrio Cosola.

Before everything changed for Khaby, he was doing a regular job like anyone else. To be more precise, he worked with control numerical machines. However, the pandemic halted his job and was left with nothing to do.

It was the same time around when the Chinese App TikTok taking over the world. So, with a lot of time in his hands, Khaby Lame decided to hop into the short video-making app. He posted his first TikTok on 15 March 2020 about a tutorial on putting on sanitizer.

Khaby decided to make reaction videos. He mostly looked for DIY videos where the others were exaggerating things which should be much simpler. So, instead of dueting, he decided to make a tutorial on the same DIY and attach it to the original video, and made his own.

The Senagalese-Italian not uttering a single word made his video a worldwide sensation. He communicated with viewers through simple gestures, a universal language for everybody to understand. His content is based on simplicity and reaction to the crazy life-hack tricks. These videos helped take the title of the king of social media of Italy from Gianluca Vacchi.

On 7 February 2021, he posted a TikTok about how to deal with a phone charger that was stuck in a cup. After that, Khaby’s social media blew up. By April of 2021, he had 6 million followers. Three days after he hit that number, he had 14 million followers.

Besides TikTok, he has also started his modeling career.

Of course, Khaby Lame is an extremely friendly guy, but gay, he doesn’t seem like one. Plus, he never addressed questions regarding his sexual orientation so we don’t know much about that part of his life.

In 2021, Khaby Lame did seem to have a girlfriend. A beautiful lady named Zaira Nucci residing in the same city appeared on his Instagram. Khaby introduced Zaira on his Instagram on 4 April 2021. In there, he wrote the caption—”Mi sono messo a cercare qualche frase sdolcinata per la descrizione, ma mi stava venendo il diabete.” Translation: “I started looking for a few cheesy words for the description, but I was getting diabetes” 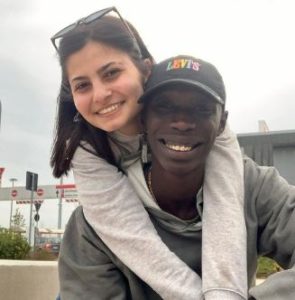 Khaby and his alleged girlfriend together in April of 2021 (Pic: Khaby’s Instagram)

The post alone earned 578k likes as of 20 May 2021. He also posts TikTok stories with her occasionally. However, the relationship required confirmation.