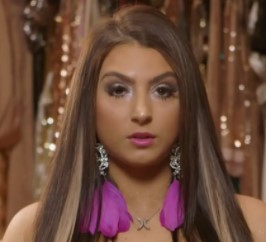 After the great success of TLC‘s reality series Unpolished Season 1, the show has finally returned for its second season. While the first season’s story was only confined to the Martone family’s salon in New York, the second installment looked at how the Martone family were affected by the tragic passing away of the patriarch of the family, Big Mike, and the financial turmoil that came with the coronavirus epidemic.

While the show was a big deal in the US, and so were its cast members, only two cast members from the Unpolished managed to garner success outside of the US. They were none other than the Martone sisters, Bria Martone, a hairstylist, and make-up specialist, and Lexi Martone, a nail artist at the Martone Salon.

The subject for this wiki is the younger sister, Bria Martone. Find out about her net worth, height, and wedding information by reading the article until the very end.

Bria Martone was born with the zodiac sign of Leo in the year 1996, which made her age 24 as of January 2021. Ever since she was born, she’s been celebrating her birthday on the 25th of July.

The co-owner of Salon Martone, Bria was born as a second daughter to her parents, Jennifer Martone (mother) and Big Mike (father). She also had an older sibling, Lexi Martone, by her side while growing up in New York.

While Bria and her sister Lexi were busy with all makeups, nail arts, and hairstyles, their mom Jennifer helped them by assisting in some of the administrative works of Salon Martone. However, Jennifer had to take up the administrative lead at the salon company after the Martone family faced financial problems and emotional turmoil following Bria’s father’s death.

Bria’s mom, who was quiet about her husband’s death for a long time, recently opened up to People’s Magazine. Big Mike died of cancer, the disease which he was diagnosed with in February 2020.

“So this has been a really tough year for our family. The COVID-19 pandemic shut the salon down, shut Big Mike’s business down and the worst of everything is Big Mike just got really so sick. It was really a horrible time,” Jennifer said in the season 2 premiere of Unpolished.

Bria also has an amazing grandmother in her family. Although Foxy (real name Eleanor Varuzzi), the grandmother to Bria and Lexi, was only seen helping her grandkids sometimes in their work, she is the most experienced in beauty and makeup in Martone Family. She has been a hairstylist for 40 years now.

Bria Martone stands at a height of 5 feet 3 inches and weighs no more than 49 kilograms. Furthermore, the beauty specialist flaunts body measurements of 35-25-34 inches.

Bria has a massive social media reach. As of Jan 2021, Bria was available on almost all big social media platforms, which included Instagram, Twitter, and Facebook.

Her biggest reach was on Instagram. Almost 77.2 thousand people followed her on the platform.

Bria acquired all the skills required for hairstyling and makeup while doing her Masters Studies in Aesthetics at Makeup Designory. In case you are worried about her license, yes she is a licensed cosmetologist. Also, Bria went to Half Hollow Hills West.

Talented artist Bria’s works have been featured in the Bronx fashion week. While there are no accurate figures on how much TLC pays to the Unpolished, reports say that the Martone sisters have a combined net worth of $3 million.

In the first season of Unpolished, the viewers saw Bria getting back together with her boyfriend of 10 years, Matt Mancuso. During the nationwide lockdown, Bria got married to her long-time boyfriend in a big wedding ceremony. In fact, that became the major storyline of Season 2 of Unpolished.

Following the marriage, the lovable duo also went on a honeymoon to Banyan Tree Mayakoba, Mexico. 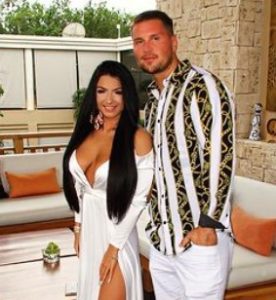 Bria with her husband, Matt Mancuso, on honeymoon.

Reportedly after marriage, Unpolished star, Bria was also helping to raise Matt’s twins, the children he had with his former girlfriend.

What was shocking to the fans of Unpolished was Bria’s decision to marry despite the recent death of her father, who had planned a grand-wedding for Bria and Matt. However, Bria’s mom Jennifer fulfilled her husband’s plans for the grand wedding to some extent.