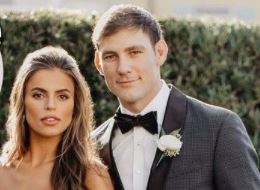 Billy was the kind of guy who preferred not to shine in his partner’s spotlight. However, fans couldn’t help but notice Brooks’s other half as they were spotted on a Miami beach in Dec 2020. The duo was seen sharing a passionate kiss, celebrating their first wedding anniversary there.

So, who is Billy Haire, proud husband of the sexy swimsuit model? Learn all about him over this wiki.

Corresponding to his birthday, Billy is of the Libra zodiac.

Talking about his family, Billy Haire was born to parents: John and Kathleen Haire. Information on his sibling wasn’t available.

Also, as private as he was, Billy didn’t share anything about his hometown. But we do know that he lived in New York, United States.

In light of his education, Billy attended Bucknell University for a Bachelor of Science, Economics, and History from 2006 to 2009. During his time there, Billy was also the captain of Divison 1 Men’s Lacrosse Team, Byckness Buddies. Later, he went to NYU Stern School of Business for his Marstes of Business Administration from 2016 to 2018.

Mentioning his distinct features, Billy is a handsome man with a faint dimple as he smiles. Also, he has brown eyes and hair color.

As of Dec 2020, Billy had his Instagram account kept private. Though he only had 1.5K following then, we’re pretty sure that his numbers will spike up if he ever chose to make it public.

He was working as a national digital director for Maven for over 4 years then. Just in case you are curious, the average salary of a design director was around $124 thousand in 2020.

Before working as a digital director, Billy took on the job as a sales manager and franchise account executive from Sports Illustrated from March 2012 to April 2016. Also, he worked in spared for Discovery Communication from August 2009 to March 2012.

Seems like Billy built his career as an office worker, while Brooks chose the starry life.

Apart from this, Billy also volunteered as a mentor for iMentor for almost 3 years and as a junior board member for Concern Worldwide for over 5 years (as of 2020, he was still engaged with it).

Trivia: Billy was a certified IAB by IAB Digita Media.

Billy Haire and Brooks Nader first met in New York City. Though their first date only lasted 25 mins, the couple shared three and a half years of dating bliss and got married on December 14, 2019.

Their wedding was held in New Orleans at St. Mary’s Church, a cathedral established in 1727. Reportedly, Brooks bought ten bridesmaids including models Robin Holzken and Annika Krijt to the ceremony. Also, Brooks’s wedding dress was selected by Billy’s mother who even gave her a ring!

Furthermore, the newlyweds took it to the dance floor, swinging around to the song by Frank Sinatra “The Way You Look Tonight.” Considering the only three months they had to plan after getting engaged in Oct 2018, the wedding was pretty well done. Thanks to Leslie Campbell Weddings & Events.

“Billy was uncontrollably crying, which, of course, made everyone else cry. It was so special!”

Also, she shared that before being her husband, Billy was also her best friend. Being able to marry her “best friend”, Brooks felt “extremely blessed” and it was “even hard to put into words” the happiness that laid within her.

But she doesn’t stop there, Brooks added that Billy was incredibly supportive of her career and that was the most important thing to her.