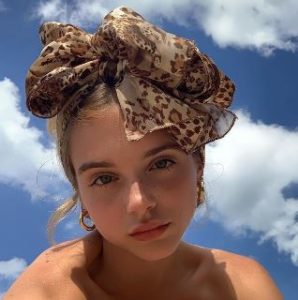 Casimere Jollette is another power-packed ballet dancer who starred on Netflix’s Tiny Pretty Things. Before the show, she had already debuted her on-screen career and also did a few modeling gigs.

But, most parts of Casimere’s life remain anonymous including details on her family and relationships. So, scroll down as the wiki unfolds details on her.

According to Famous Birthdays, beautiful Casimere Jollette found her way into his world on 26 March 1996. She turned 24 years old while celebrating her birthday in March of 2020.

Per her date of birth, Casimere is an Aries by zodiac sign with qualities such as elegant, confidence, spontaneous, and independence which perfectly suits her personality.

Casimere Jollette was born to her father Ralph Jollette and her mother Carolyn Jollette in her hometown of Addison, Illinois. Her parents married in a Catholic Church within three months of meeting one another. In October of 2020, the couple celebrated 33 years of their marriage.

Unfolding details on her parents, she comes from a family of a talented group of people who found success in their respective fields.

Ralph, her father, is an engineer and owner of Appeal Flooring Specialities which he founded in May of 1999. Before that, he also founded other companies such as Appeal Carper & Upholstery Cleaners, Inc., National Appeal, Inc., Nature’s Appeal Mfg. Corp.

As for Carolyn, her Instagram bio tells speaks that she is an author of her book Missing From The Sidelines. Moreover, she went on discovering a career as an interior designer, explored the tech industry, and was also a PMU artist.

Since Carolyn looks very young, many mistake her for Casimere’s sister. However, Casimere doesn’t have a sister for a sibling.

Rather, Casimere has a very talented older brother named Ralphie Jollette. He works in Capitol Records as a team coordinator in commercial operations.

Casimere and Ralphie are of mixed ethnicity and inherited French, Lithuanian, and Italian heritage from their parents.

One look at the past photos of Carolyn as a young lady and we don’t need to wonder where Casimere Jollette got her good looks from. The daughter of a former cheerleader stood tall at the height of 5 feet 4 inches (1.63 meters) which is a below-average height for an American.

However, that couldn’t stop Casimere Jollette from making it on her set path. Moreover, the actress weighed about 52 kilograms (114 lbs) as listed on her resume. Plus, her measurements of 34-25-35 inches blessed her with a stunning look.

Along with the career of Casimere Jollette, her social media reach also shows an upward rising curve. Her Twitter account is probably the platform with the least number of followers, 217.

Casimere Jollette also started her YouTube channel which boasted a total of 310 subscribers as of this writing.

TV actress Casimere Jollette showed an early glimpse of talent to make it as a celebrity in the entertainment industry. She started dancing at the tender age of 2, ever since then, there was nothing that could stop her.

By the age of 7, Casimere had already debuted as a young model appearing alongside Ford Models after her parents signed her up. As a young dancer, she competed in several competitions and won.

At the age of 12, young Casimere focused all of her attention on ballet from the several forms of dances that she performed.

Training under the supervision and guidance of Sherry Moray, she turned into a professional. Furthermore, she also joined Chicago’s Joffrey Ballet and American Ballet Theatre to further sharpen her skills as a dancer.

In 2012, Casimere was featured as one of the Daily Herald’s Suburban Standouts. However, she suffered an injury at the time and tried recovering from it while she trained with Sherry in her studio at Downers Grove.

By the time Lisa Morgan discovered her, she had already done a few gigs on TV commercials and in modeling. As of this writing, Lisa went on to become her manager.

After a little encouragement from Lisa, she signed up with an LA-based agency called Paradigm to audition for Bunheads. From that point on, Casimere realized she could also make it as an actress and dancer.

Conclusively, Casimere Jollette earned a total net worth of $110 thousand for her contributions overall.

Most of the fans on the internet believed Casimere Jollette was in a relationship with the actor Brennan Clost. The intimacy of the two ignited a rumor that they might actually be dating but didn’t go public.

Some of the fans even dared to go on the comment section and asked them about the nature of their relationship. However, Brennan clarified that the two were best friends and nothing more.

But, Casimere’s social media gave a few hints on her relationship status.

Another rumor of Casimere’s romantic involvement surfaced on the internet. Many speculated that she dated Alexander Eling, another actor from Netflix’s show.

But the relationship was never confirmed but everyone believed that the two are seeing each other.