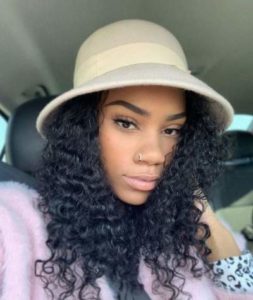 American reality television series Teen Mom 2 aired its last episode for the tenth season on 8th December in 2020. And, thus it was reported around the same time, that a newcomer Ashley Jones from Teen Mom: Young and Pregnant would be joining the show to replace Chelsea Houska. Chelsea had announced her departure from the series after 10 seasons.

Meanwhile, in the writing below is everything you need to know about the newfound teen mom.

Ashley’s mother is named Tasheilia Chapple. She is mostly known as “Pastor Tea” and according to a Teen Mom fandom-wiki, Tasheilia is married to Ted Chapple. The man is not, however, Ashley’s biological father.

Also, for siblings, Ashley has a sister with the name Christiana “Chris” Toliver who appeared on Teen Mom: Young and Pregnant.

Ashley sure has caused some kind of ambiguity when it comes to her last name. She is known as Ashley Joee on YouTube (before she changed it) and Facebook and Ashley Siren on Instagram and YouTube.

In the meantime, we do not know anything collectively about her biological parents.

On 16th January 2020, Ashley Jones shared an exciting Instagram update regarding her weight loss journey, revealing that she had dropped 40 pounds over the course of nine months.

She then shared a before-after photo to display how far she had come from February 2018 to November 2018.

Sometime in August 2020, Ashley Jones also created quite some buzz on social media as she revealed the “augmentation and lift” she had done to her breasts.

She posted a selfie on Instagram, in a zipped-up hoodie, with a peace sign thrown up, letting everyone know that she now had “new t*ts.”

On the occasion, Ashley thanked all her fans for the “support” they showered her after the enhancement news. She then promised them she would be documenting the whole process of her post-plastic surgery recovery.

While all this was happening, her baby-father Bar had been there for her, all the while, figuring out the medication, making her soup, and comforting her through the process.

Meanwhile, she said, the purpose of her YouTube channel is to put out a story for her audience that she was in control of editing, unlike the ones in Teen Mom.

Years later, she is anticipated to be making some immediate impact on the new show as she looks ahead to some big events in her life.

Besides, the reality star has been open about her past as a stripper.

Further, we know, Ashley is adding to her existing net worth i.e. under $750 thousand, part working as an entrepreneur. In July, she launched a ‘smoke shop’ selling glitter ashtrays. The shop’s page informed that “custom smoke accessories” are made in Ashley’s “downtime” and that orders can be placed via DM.

Also, sometime before, she had started her skincare line which she named, Sirens Arch.

Ashley Jones shares a daughter (born circa 2017) with her baby daddy, Bariki Smith a.k.a Bar.

Ashley was first engaged to Bar during season one of Young + Pregnant. Then, the relationship survived a messy break-up sometime later in 2019.

After being on-again and off-again all the way back to the first season of the show, the young parents were finally set to tie the knot, or so said the Hidden Remote.

However, neither Ashley nor Bar have commented anything about the wedding.

It was on 27th November 2020, Ashley last shared a picture of her with Bar and their adorable daughter. 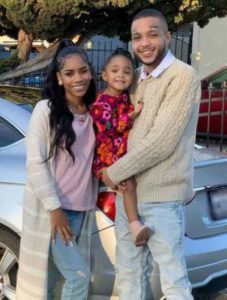 While their relationship had been contentious over the years, Ashley managed to avoid a great deal of the controversies that other Teen Mom 2 cast encountered, such as being arrested or failing to pay taxes.